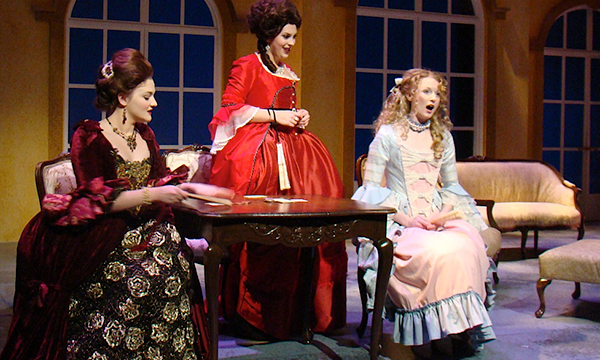 According to Director Rebecca Holderness, audiences are drawn to the play “Les Liaisons Dangereuses” by its provocative nature.

“The play revolves around sex, love and power – and is a unique combination of an 18th century epistolary novel converted into a contemporary play,” she says. Holderness is an associate professor in the Department of Theatre, UWM Peck School of the Arts.

“Les Liaisons Dangereuses” will be presented on UWM’s Mainstage Theatre, 2400 E. Kenwood Blvd., Nov. 20-24. This award-winning drama by Christopher Hampton, (based on de Laclos’ 1782 novel), is an exploration of the aristocratic excesses of pre-revolutionary France. 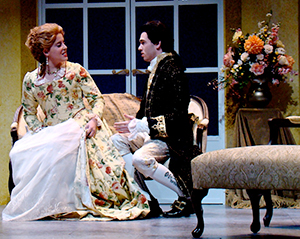 It follows the impact of a cruel wager between the beautiful, debauched Marquise de Merteuil and her former lover, Vicomte de Valmont. Here, in a labyrinth of intrigue and deception, fate ultimately hangs on the edge of a sword. (The play contains some adult content.)

While the story also has been covered in several movies, Holderness says that it’s important to remember that there is an actual period novel behind it. “That lends a special authenticity to the production.”

That belief that it’s “good to draw people back to the original source” influenced some key aspects of the UWM production.

“We are basing the visual style of the production on the research done by the technical team and our students into18th century architecture, set design, costumes and music,” says Holderness. “Les Liaisons Dangereuses” presents an opportunity to explore the Enlightenment period in France, just before the Revolution.”

In fact, the production’s first rehearsal was spent in the Special Collections area of the Golda Meir Library, aided by Rebecca Littman and Max Yela, UWM Libraries. The cast examined 18th century documents and listened to opera and looked at art from the period

The actors are wearing authentic 18th century costumes “from the skin out,” while the scene lighting and construction also reflects that, for example, used at Versailles.

“In the 18th century, much of the lighting on stages was flame based – either candles or oil lamps,” says Sarah Hamilton, production manager in the UWM Department of Dance. She holds an MFA in Theatre (Lighting Design) from Illinois State University, and is the lighting designer for “Les Liaisons Dangereuses.”

“Theatres often would light their stages from above with large chandeliers, and that visual element has filtered through to our production. The warmth and softness of those flame sources is also going to be a major component in the realized lighting design.” Hamilton says her goal is to have the lighting create the overall “sense of awe and splendor” an 18th century audience would have felt – but in a 21st century audience.

Holderness describes the costuming as “an entry point” to the play’s characters. “You only understand what’s provocative or sensual about a period if you literally get inside it.” The costumes are being designed by Jason Orlenko. A UWM alum (08 BA Theatre Studies), he recently completed an MFA in Costume Design at Indiana University.

“All of our characters are wealthy aristocrats or upstairs servants, so this is pretty easy information to find,” says Orlenko. “It becomes tougher if your production has peasants or lower class characters as they were not the people immortalized in portraits and fashion plates.”

After the B.F.A. Costume Production students got their costume-build assignments, they went about researching their specific garment, how it would be constructed historically and what would need to be altered to serve theatrical purposes. This meant looking at photographs from museum collections of historical garments, studying patterns lifted from historical garments and referencing paintings and fashion plates of the time.

“This is a sexy and scandalous play, so it made sense to see our characters in various states of undress as they are caught amidst their naughty shenanigans and liaisons,” says Orlenko. “Also, the corsets and understructures of the time are fascinating themselves, and audiences rarely get to see them in stage and film productions.”

But all of this authenticity is extremely time consuming. “As we’ve been going through fittings, it takes upwards of fifteen minutes just to get the actresses in all of the underwear to start fitting the dresses. All of the women wear stockings, a chemise, corset, some are in panniers [the hoops that sit on the hips to widen out the skirt], one or more petticoats – and that’s before you even get to the gown. Also, incorporating onstage dressing provides some challenges to our performers playing servants, as they are the ones who have to deal with getting everything on the actors properly.”

This production will be “luscious in the best sense of the word,” says Holderness. “People should come and see it because this play will be pleasurable in the same way that a really good novel is.”

Tickets are $17/general public; $15/seniors and UWM faculty and staff. Student tickets are $5 in advance $8 at the door. Theatre majors are free.