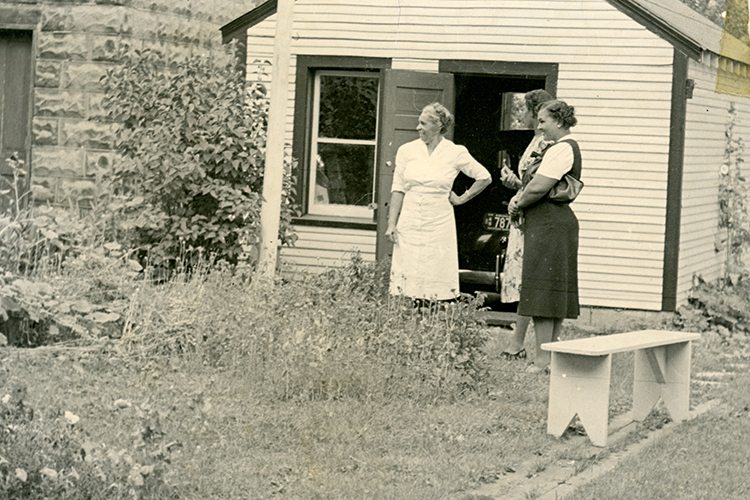 This picture, part of the Lands We Share exhibit, shows the garden in the backyard of a family home in the Bronzeville neighborhood of Milwaukee during the 1940s. (Photo courtesy of the Wisconsin Black Historical Society/Museum)

James Levy is no stranger to discussions about race — he teaches several classes about race and ethnicity at UW-Whitewater. But he’s found that many of his students are uncomfortable with contributing to class discussions surrounding those topics.

A fellow faculty member at UW-Whitewater mentioned that most students at the university are somehow connected to farms, either having grown up on one or having parents who did. That, Levy thought, could be a way in.

Levy, with the help of four other public historians in the UW System, created the Wisconsin Farms Oral History Project, where students became researchers and interviewers to learn more about farming history.

The oral history project started six years ago, and The Lands We Share exhibit is the culmination of that project’s work with collaborating with various partners and the identification of powerful and important stories.

“If you put together race, farming and state history, that’s our project,” Levy said.

The exhibit has been touring Wisconsin since October. After finishing a placement at the Wisconsin Black Historical Society, the exhibit moves March 4 to the Golda Meir Library at UW-Milwaukee, where it will be on display in the Daniel M. Soref Learning Commons until March 22. The public is invited to a reception and presentation by those who worked on the project on Friday, March 8, from 3 to 5 p.m.

The exhibit is traveling to the four cities of the four UW System universities involved (UW-Whitewater, UW-Oshkosh, UW-Milwaukee and UW-Madison).

Levy contacted other public historians throughout the UW System to see if they wanted to get involved. Jasmine Alinder, associate professor of history and associate dean of the College of Letters & Science at UWM, said yes, as did Steven Kercher, the chair of the history program at UW-Oshkosh, and Troy Reeves, the head of the oral history program at UW-Madison.

“James was instrumental at reaching out across the system,” Alinder said. “To his credit, that’s an unusual thing to do. There are not many cross-campus projects. At UWM, we were also fortunate to get support from the Office of Undergraduate Research.”

Together the four public historians have used the program at their respective campuses through boot camps, undergraduate researchers and teaching classes.

Kercher created an ongoing general education curriculum based on the project that is taught by a few professors at UW-Oshkosh.

There were summer boot camps at UW-Oshkosh, UW-Milwaukee, UW-Madison and UW-Whitewater, where the mostly undergraduate students learned the best ways to interview people.

“They were like training sessions for them to understand and learn how to use oral history,” Alinder said.

The students found out there was a long history of farming in Wisconsin that has included many races and ethnicities, from the Oneida Nation to German and Hmong immigrants.

While the museum display teaches about farming history, there is another important part of the exhibit: farm-to-table conversation dinners.

“Many exhibitions serve as ends in themselves – destinations to be visited,” Levy said. “We look at our exhibition as a means to an end regarding community engagement. That is, the exhibit is designed to set up and frame the community conversations.”

The dinners were an unconventional exhibit experience that helps build a sense of community through locally grown food and dialogue.

“The meals have been fantastic,” Levy said.

Each city that the exhibit travels to will host a farm to table conversation dinner. Fifty to 100 people share food that is locally grown or catered while getting to know one another.

“After dinner is wrapping up, we do a short presentation so people in one region can see how they are connected to the other featured regions in the project,” Levy said.

Five farm sites are featured in the exhibit: two from Jefferson County, one from Milwaukee and two from northeastern Wisconsin.

“There were so many directions we could have gone,” Levy said. “We decided to focus on specific farms, and dive deep for each one.”

In the small town of Seymour near Green Bay is the Oneida Nation farm, which spans more than 5,000 acres. It and two smaller farms on the Oneida reservation are included in the exhibit. The smallest of those three, run by the Ohe-laku group, grows white corn using traditional farming methods.

In Allenville, near Oshkosh, is the Allen Family Farm which has been passed down from generation to generation for over 100 years.

In Jefferson County are the Dettmann Dairy Farms and the Vang C&C Farm, which is the first certified organic Hmong farm in Wisconsin.

Milwaukee is known for its urban agriculture roots. The Metcalfe Park Legacy Garden is an urban garden in one of the poorer neighborhoods of Milwaukee where fresh food is a scarce commodity.

Hongyan Yang, one of the student researchers of the exhibit, always thought of farmers markets as a middle-class amenity. But the Walker’s Square Farmers Market is something different. The market is full of working class people in search of fresh fruit and vegetables at reasonable prices.

“The farmers market has very diverse customers. They sometimes have Malaysian, Indian, Chinese and Hmong,” Yang said. “The white people are not the majority at this farmers market.”

Yang started researching the Walker’s Square Farmers Market in the fall of 2017. She is a doctoral student at UWM in the Buildings, Landscapes and Cultures program through the School of Architecture and Urban Planning.

“The theme of the project is about the connection between food, agriculture and race or ethnicity, which aligned with my research interests,” Yang said.

Yang is one of four student researchers at UWM in charge of the Milwaukee section of the exhibit, with Alinder supervising. The Walker’s Square Farmers Market is featured in the online presentation of the Lands We Share exhibit, albeit not in the physical exhibit traveling the state.

Yang and Margarita Garcia-Rojas were assigned to research the Walker Square Farmers Market, while Jamison Ellis and Shavaughn Lawson were responsible for gathering information about the Metcalf Park Legacy Garden. 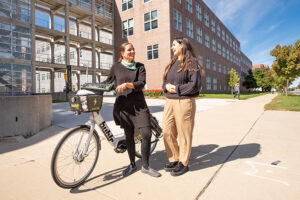