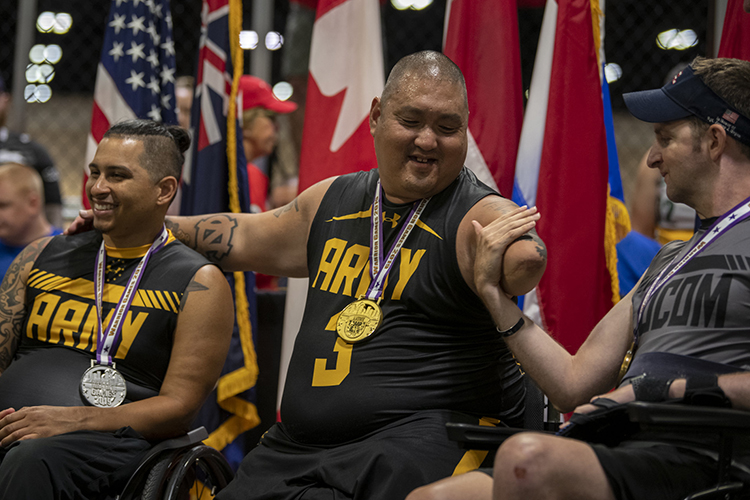 U.S. Army Staff Sgt. Matthew Lammers (center) reaches out to U.S. Army Sgt. 1st Class Cory Remsberg after the medal ceremony for indoor rowing at the 2019 Warrior Games in Tampa, Florida. The Warrior Games were established in 2010 as a way to enhance the recovery and rehabilitation of wounded, ill and injured service members and expose them to adaptive sports. (Department of Defense photo/ U.S. Air Force Staff Sgt. Marianique Santos)

Alexandra Rodriguez has been part of the military world for most of her life.

“I have a personal connection to the military,” said Rodriguez, a doctoral student of kinesiology at UWM. “My father is active in the Navy, and I have a cousin who served in the Marines.”

That’s one reason why Rodriguez wanted to volunteer at the Warrior Games, an international competition for disabled veterans held in Tampa, Florida.

“Being around the military culture, I have always wanted to find a way to give back,” Rodriguez said. “The women and men ultimately give the biggest sacrifice by serving our country.”

Volunteering at the Warrior Games also gave Rodriguez an opportunity to explore her research interests, which focus on aspects of body image among disabled veterans.

Rodriguez wants to learn more about the way disabled veterans feel about their bodies, and how participation in sport and exercise can influence body image.

“I started digging around to see if there were any gaps in the literature, and sure enough there hasn’t been much research done in terms of body image with athletes with physical disabilities, even less so with veterans,” Rodriguez said.

The Warrior Games is a sports competition for disabled veterans, organized and funded by the Department of Defense. Veterans from all over the world, including the United Kingdom, Canada, Australia, the Netherlands and Denmark, participate. More than 300 athletes competed in 14 sports, including shooting, wheelchair basketball and swimming.

The main purpose of the Warrior Games is to help the wounded veterans gain strength and endurance through competitive sports and show their potential.

“Because of her interest in looking at the experiences of veterans, the Warrior Games is a really great opportunity. It’s a really large international event,” said Christy Greenleaf, a UWM kinesiology professor and Rodriguez’s academic advisor.

“Volunteering for the Warrior Games is really all Alexandra. She sought it out all on her own.”

Volunteers had many roles at the event. One day, Rodriguez worked to take care of the crowd to make sure that no one was near the shooters while they were competing. Another day, Rodriguez was assigned as a timer for the  swimming event.

Rodriguez also met Army and Air Force performance coaches, whom she hopes can help her research.

The swimming contest was Rodriguez’s favorite part of volunteering and also the most personally impactful.

“I was watching all these men and women compete and giving it their all. The crowd is going crazy for all of them,” Rodriguez said. “In that moment it hit me that I was able to give something back to all of them.”