Iron Age people living in what’s now Germany were buried with items important to them. That included their alcohol.

“Alcohol played a central role in creating a relationship between the populace and the leaders,” says UWM anthropology doctoral candidate Josh Driscoll. “People lived all across the landscape, and they’d come together at communal feasts hosted by powerful people. It was a way for leaders to project their power.”

So Driscoll, whose research includes re-creating old beers, was thrilled to be involved in a re-creation using beverage remnants from a 2,450-year-old cauldron. Bettina Arnold, a UWM professor of anthropology and archaeology, found it in a grave near the Heuneburg hillfort in southwestern Germany during her excavations there.

Re-creating Iron Age beers helps Driscoll determine their shelf life. He believes there’s a correlation between shelf life and how many people could have attended those feasts where complex social ties were created. 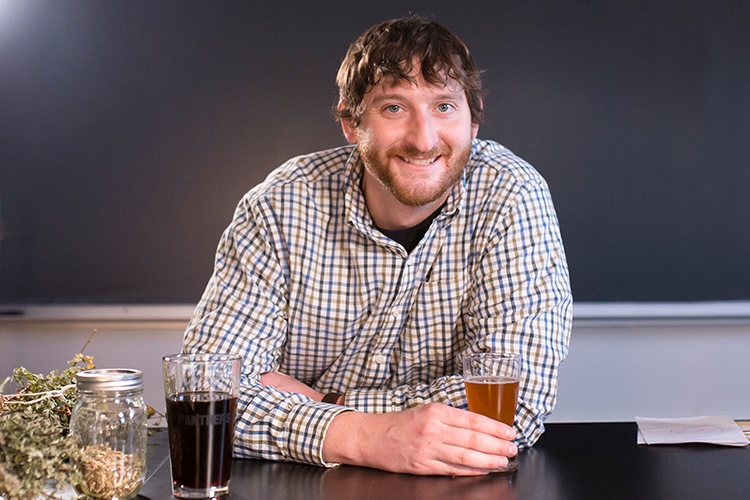 Beer was quite different in the Iron Age, which ran from 800 to 52 B.C., and the yeast used would’ve made for a tart taste. Hops, a bitter-tasting natural preservative, was centuries removed from becoming a standard ingredient. Driscoll wants to know how long the beers could have lasted without the benefit of hops.

“I’m finding that beer may have lasted longer than previously thought and was something that could be stockpiled, meaning that feasting could happen at a larger scale,” Driscoll says. “That means the people in power were able to create more social ties.”

Having access to beer even might have prevented wars. Driscoll notes that alcohol had a role in the peaceful transition of power from one king to another. “If you can store alcohol, you can prepare for unexpected moments like a funerary feast,” Driscoll says. “The heir in a line of succession would want to solidify his position by hosting a feast. Larger stockpiles would have meant that people with alcohol could better react to political situations in strategic ways.”

Using the Heuneburg beverage remnants as a guide, Driscoll and Arnold worked with Milwaukee’s Lakefront Brewery in 2017 to craft a braggot, a cross between beer and mead that uses malt and honey to fuel fermentation. Barley, mint, meadowsweet and honey were among the experimental brew’s ingredients, and though it wasn’t a strict re-creation, it gave researchers an idea of how Iron Age beverages might have tasted.

The result was a somewhat minty brew like a modern-day porter with an 8 percent alcohol by volume. “Quite quaffable,” Arnold says.