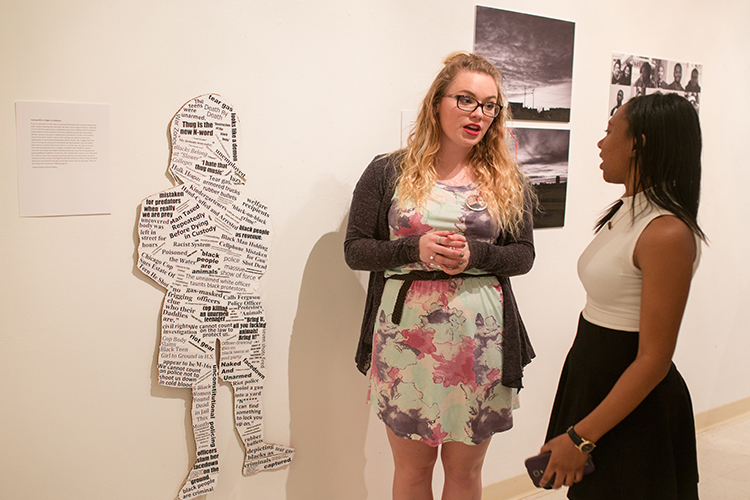 Ashley Matter (left) discusses the collage of headlines, quotes and labels about black Americans that she and collaborator Nicole Beilke (not pictured) created. 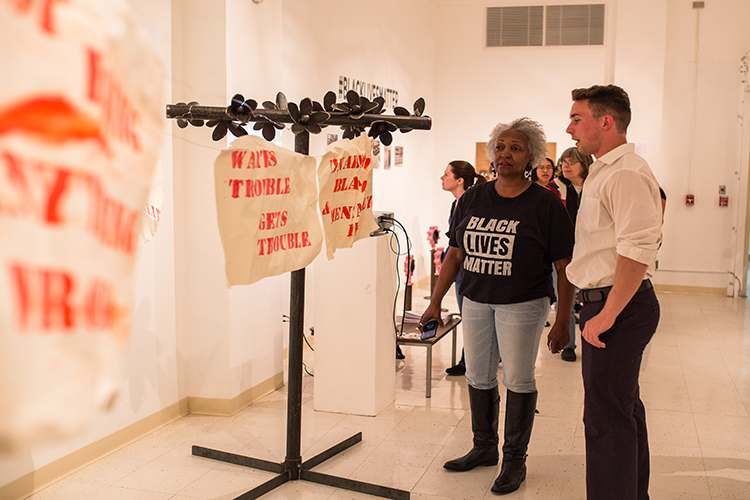 John Parlier (right) describes his piece, a collection of quotes from the aftermath of Dontre Hamilton's death. Hamilton, an African-American man diagnosed with mental illness, was killed by gunfire from ex-Milwaukee Police officer Christopher Manney in 2014 at Red Arrow Park. 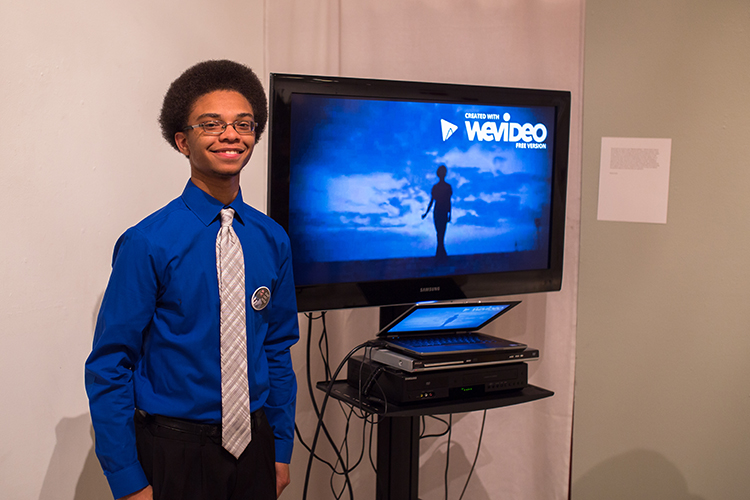 Quincy Drane stands in front of his multimedia piece that explores dance, speech and the tender anecdote of a child. 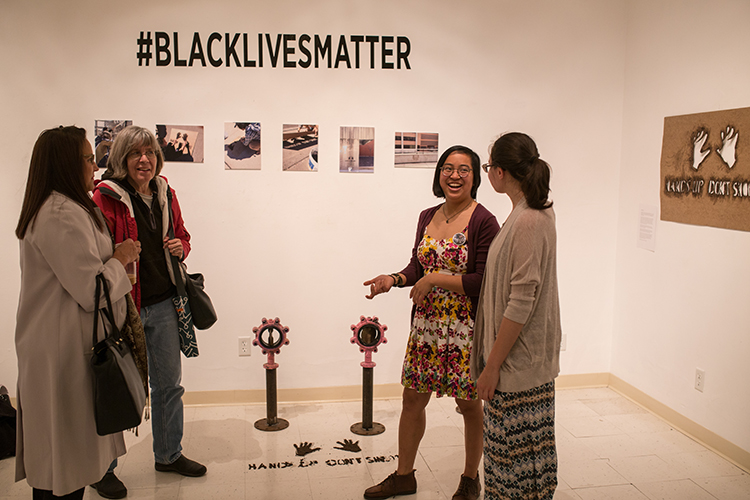 Maia Zu-Shan Stack (second from right) and Laura Kim Sherbeck (far right) speak about their pop-up art pieces, which are stenciled with mud. 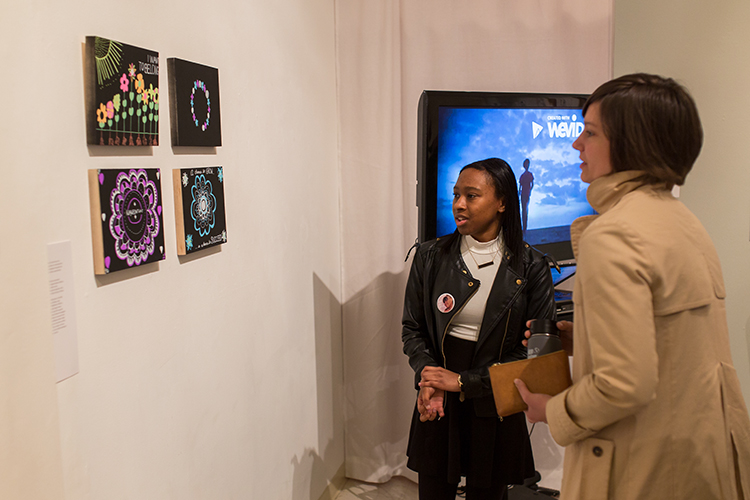 Courtney Price (left) focused her work on education issues for girls of color, including deficiencies in funding and resources, with the goal of empowering girls to take advantage of opportunities that come their way. 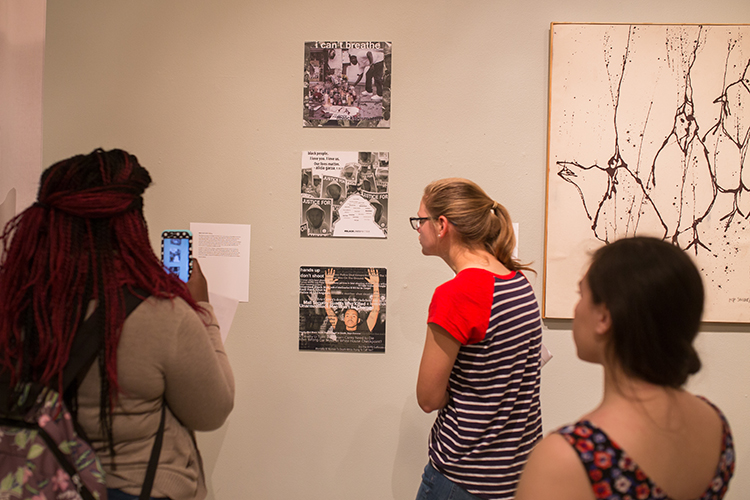 Nicole Dolezal's series of collages documents the Black Lives Matter movement's history, with an emphasis on major events and the people affected by them. 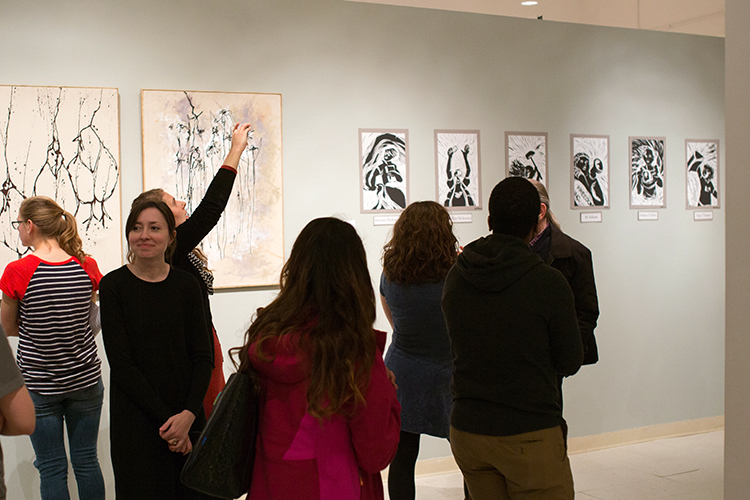 Crowds gather in front of pieces by Kelly Parks Snider ("The Shackle Series," left) and Isabel Braman ("We Are Not Your MLK," right).

Students in a University of Wisconsin-Milwaukee class studying the Black Lives Matter movement have translated their lessons into a multimedia art exhibition. The resulting “Art Expo #BlackLivesMatter” runs through Tuesday, May 10, in Mitchell Hall’s Art History Gallery.

Using creative works ranging from collage to dance to poetry, students shared their takeaways from Associate Professor David Pate’s Honors College course “#BlackLivesMatter: An analysis and critique of the movement.” The course drew students from a range of disciplines, such as music, social work, biology, education, journalism and architecture.

Pate heard of a similar course taught by friend Abigail Neely at Dartmouth College, and he thought UWM students could benefit from exploring the topic. While researching a proposal to the Honors College, he was amazed to see how few universities were offering a course like Neely’s.

“We’re in a city where race is a big issue and poverty is a big issue,” Pate said, “so it made sense that we should have class. We should be offering that as a discussion. We sell ourselves as being the most diverse school, so I said to myself, well, this could be a good fit.”

Class material “went beyond what we see in the media,” said junior Chloe Gropper, “to issues that don’t getting a lot of attention: food insecurity, the black LGBT community, things like that.”

Gropper’s contribution to the exhibit was a poem exploring race and homosexuality, and you can hear her read the poem at this link. Senior journalism major Nicole Beilke and pre-med junior Ashley Matter teamed up for a more visual piece. “Starting With no Right to Childhood” is a silhouette of a child containing a collage of headlines and quotes about topics the course dealt with.

“Our concept is that when racism is projected onto the lives of children,” Beilke said, “they don’t even have the right to innocence at the beginning of their lives.”

The students, many of whom had little formal artistic training, worked with Madison artist Kelly Parks Snider to conceptualize their pieces for the exhibit. Pate noted that some students were particularly challenged by the course material because of their backgrounds.

“In their discussion blogs they’ve admitted that there were things they didn’t know, because they weren’t forced to know,” Pate said. “I think they found that a little depressing.”

But Pate was pleased with how they responded.

“This is the highlight of my academic life,” he said. “I’ve never had a group of students like this, ever. They’ve pushed themselves to understand.”