Firefighters can go from a resting heart rate to a racing heart rate in minutes. They lug ladders, hoses, tanks and other gear that can weigh 100-200 pounds. They twist and squat, crawl and duck in fast-moving situations.

Nationally, two-thirds of firefighters’ injuries are from strains and sprains, similar to competitive athletes. “We’re finally getting it out there that firefighting is a strenuous job,” said firefighter Andrew Wilke, a 22-year veteran. “We’re ordinary people doing a job that has some unique demands.”

UW-Milwaukee associate professor and licensed athletic trainer Kyle Ebersole calls these first responders “occupational athletes.” After studying the unique physical demands of their profession for nearly a decade, he used his expertise and close relationships with the Milwaukee Fire Department to redesign departmental fitness and performance evaluations. His approach helps new recruits train better for the job and accelerates the recovery process for injured firefighters. Better health and fewer injuries also means major savings for fire departments and the taxpayers who fund them – $4 million in Milwaukee since 2010.

Ebersole became interested in firefighter fitness in 2005 at the University of Illinois, where a faculty mentor was involved with the school’s Fire Institute. For Ebersole, the work raised more questions.

By 2008, Ebersole had returned to UW-Milwaukee, where he’d been a professor and director of the athletic training program nearly a decade earlier. Networking through friends and colleagues, Ebersole connected with Luis Rivera, a physical therapist who introduced him to Jason Mims, health and safety officer for Milwaukee Fire Department.

“Mims said he needed help reducing firefighters’ injury rate and the costs involved,” Ebersole recalled. “Luis told him: ‘I know someone who may be able to help.’ That’s where the three of us gelled this idea.” 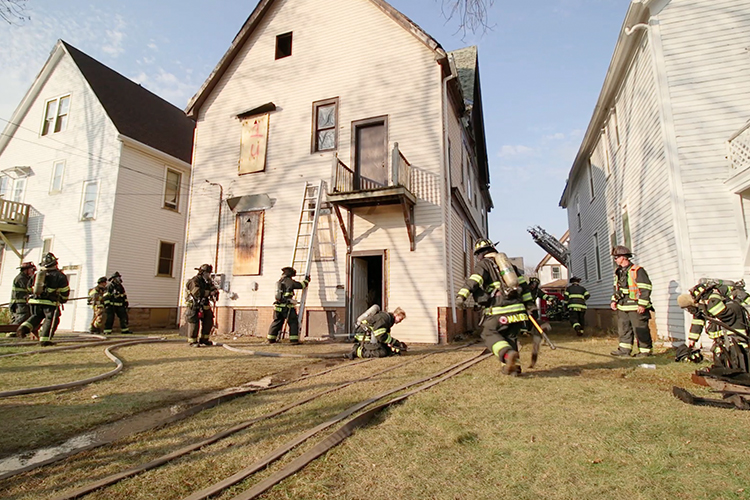 Ebersole and his partners designed a plan to prepare Milwaukee firefighters for the physical rigors of the job. The department launched a Peer Fitness Training Program, which has certified 30 firefighters as personal fitness trainers since 2010. Others firefighters who want to establish personal fitness programs can now go to their colleagues for training.

Ebersole’s contribution is just one part of a broad focus on firefighter wellness in the department. But he’s credited with being a major reason the overall effort has succeeded, saving millions of dollars with fewer medical claims, less time lost at work and lower costs for replacements.

“It could not have been done without Kyle understanding the vision and saying, ‘How do we get there through training, through research, through some of the programs we’re working on right now?’” Mims said. “The programs are so much easier to push through because the union buys in, because firefighters trust Dr. Ebersole. It’s a partnership you can’t even dream up.”

Ebersole, Mims and Rivera now hope to scale up their Milwaukee success nationally. Their startup company, Tactical Athlete Health and Performance Institute, won a $25,000 entrepreneurship Ideadvance Grant from UW-Extension and already has studied firefighter fitness programs at more than 50 departments. The trio presented their program at the Metropolitan Fire Chiefs Conference in Las Vegas last year and are looking to land additional consulting contracts.

Ebersole continues to teach in the Athletic Training and Physical Therapy programs in the Integrative Health Care and Performance unit and has four students – two at the graduate level and two undergrads – working with him on his research.

“This work has created a palpable buzz throughout the active-duty firefighter population,” said David Cornell, a doctoral candidate in kinesiology who’s doing his dissertation using data from an intervention study done with firefighters in the field. “This buzz has led to others becoming interested, as well. Hopefully, the end products of this study can create an even bigger snowball effect across these departments and the community.”