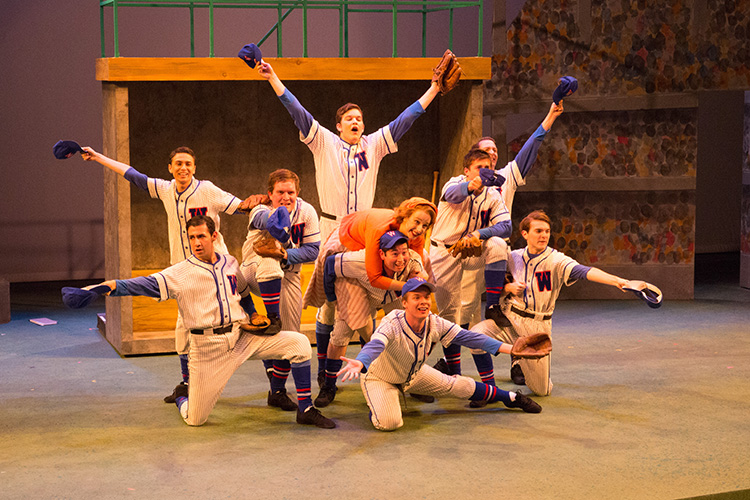 The Washington Senators are finally winning - even if they don't know why. UWM's production of "Damn Yankees" opens Nov 18. (UWM Photo/Troye Fox) 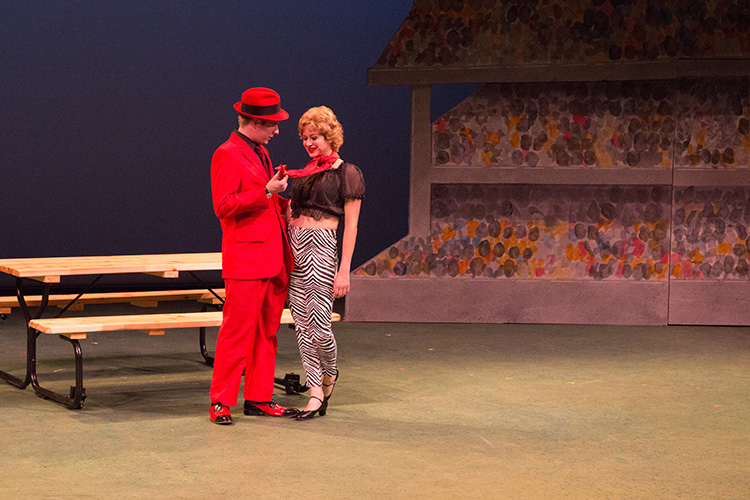 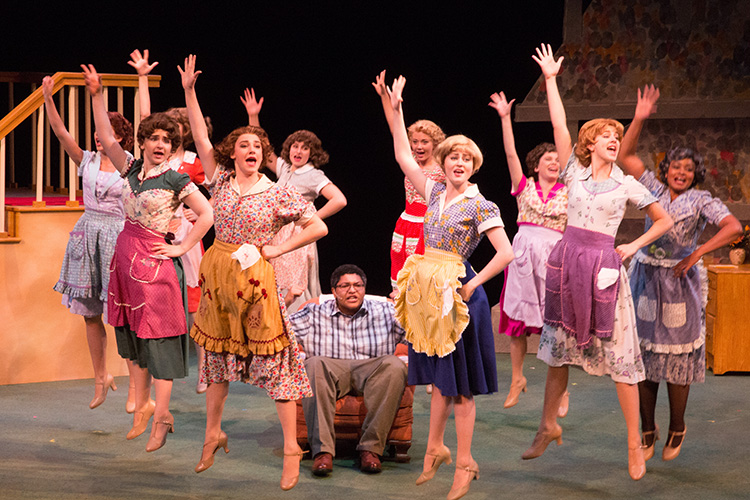 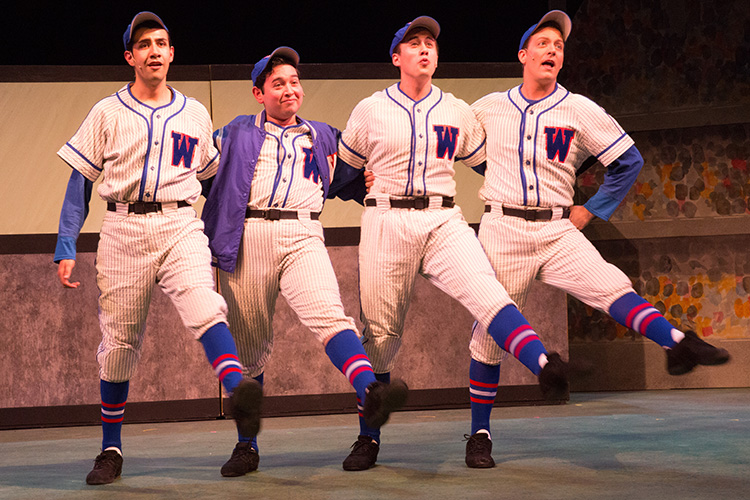 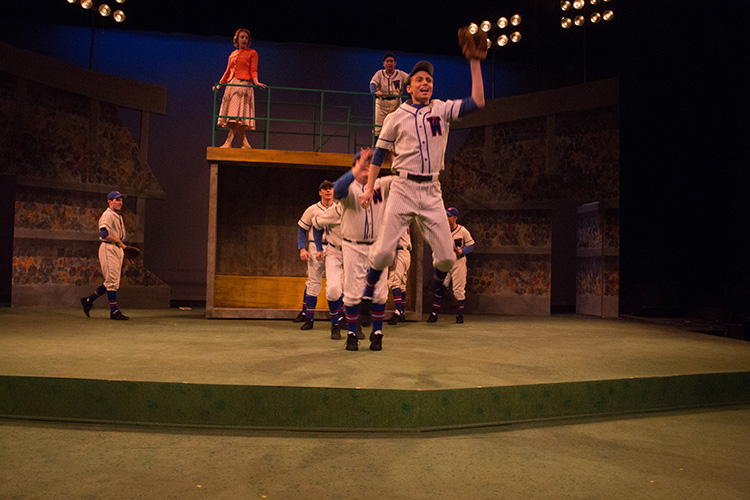 "Damn Yankees" tells the story of Joe Boyd (transformed into ballplayer Joe Hardy) who sells his soul to the devil so his Washington Senators can finally beat the Yankees. UWM's production of "Damn Yankees" opens Nov 18. (UWM Photo/Troye Fox) 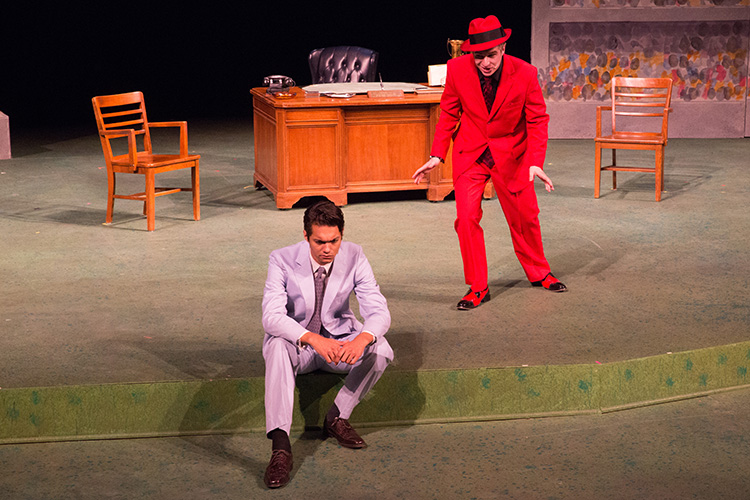 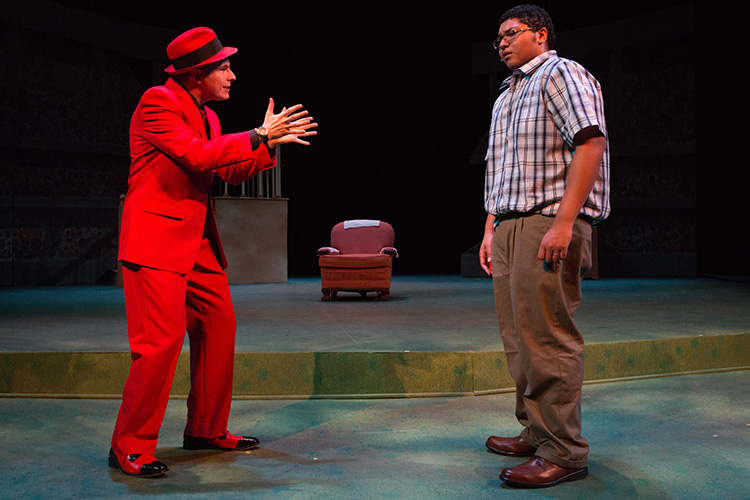 The 2015 World Series has come and gone, but in the immortal words of the late Yogi Berra – “It ain’t over ‘til it’s over.”

Baseball and music fans have one more chance this year to celebrate the national pastime with the UW-Milwaukee production of “Damn Yankees,” Nov. 18-22, at the Mainstage Theatre, 2400 E. Kenwood Blvd.

In addition to all the baseball and music onstage, the Milwaukee Brewers’ Racing Sausages will have a photo session with fans on opening night.

Produced by the Peck School of the Arts Theatre Department in collaboration with the Music and Dance departments, the musical debuted in the mid-1950s as a modern retelling of the ancient legend of Faust, who sold his soul to the devil for unlimited knowledge and worldly power.

In “Damn Yankees,” the middle-aged hero, Joe Boyd, exchanges his soul for a chance to help his beloved but perpetually last-place baseball team, the Washington Senators, defeat the New York Yankees in the pennant race. In the 1950s, the period in which the musical is set, the all-powerful Yankees dominated baseball, while the cynical description of the Washington Senators was: “First in war, first in peace and last in the American League.”

“The modern audience can still relate to the play because it acknowledges and celebrates America’s favorite pastime – baseball,” said Tony Horne, director of the UWM production and associate professor of directing and musical theater in the Peck School of the Arts. “It examines our unending fascination with the idea of ‘making a deal with the devil.’ That idea shows up over and over again in artistic works such as Goethe’s ‘Faust,’ and in legend and folklore.”

The Tony-award winning play incorporates music, dance and comedy in its retelling of the story. Probably the best known of the musical’s many songs is “Whatever Lola Wants,” a sultry ballad sung by one of the devil’s minions.

“I love this musical because it celebrates baseball with an enormous amount of heart and love while asking each of us to consider what we cherish most in life and what we are willing to risk for it,” Horne said.

Horne and his collaborators made the decision to stay with the play’s original time period while subtly highlighting some key differences between then and now.

“We are setting the play in 1957 and playing it as close to the original intent as possible,” Horne said. “What is interesting is that we have a large cast comprised of actors of different races and ethnicities. This allows us to examine topics not directly addressed in the play such as interracial marriage and men of color in major league baseball. I hope that the diversity in the cast will encourage the audience to look at these issues, too.”

On opening night, Nov. 18, fans may have their pictures taken from 7 to 7:30 p.m. with the Milwaukee Brewers Racing Sausages.