The heavy industry that thrived along Milwaukee’s inner harbor in the 19th and 20th centuries is long gone, and a redevelopment movement is well underway. West of the Hoan Bridge, projects call for parks, walking paths and boat ramps, all with the goal of drawing people back to the water.

But what about what’s going on in the water itself?

“We have plans for humans,” says John Janssen, a fisheries biologist and professor with the School of Freshwater Sciences, “but no plans for what’s going on under the water. And they’re related. People, for example, like to see fish, and they like to see people fishing.”

When completed, print and digital maps will be available to anyone. 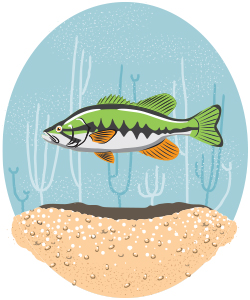 “The maps offer important insights on the ecological system for the inner harbor and adjoining rivers,” Beckmann says. “By making this resource available, citizens can be more informed about protecting the environment.”

Some 30 agencies have joined forces to support the project through the Fund for Lake Michigan, and each has a particular interest. Priorities for the state’s Department of Natural Resources, which is a major sponsor, may center on ecology, whereas the Coast Guard’s focus may be navigation. But all of the partners in the project share a desire to know what is where.

The boxlike inner harbor, with its steel and concrete shoreline, 30-foot-deep waters and silt-smothered lakebed, largely lacks fish habitat. Yet there are pockets in and around the harbor bursting with species like smallmouth and largemouth bass, bluegill, pike and sunfish.

Over the past two years, Janssen’s graduate student, Brennan Dow, has tried to locate these places, discern what makes them work and devise ways to re-create them. Such efforts could allow fish populations in and around the inner harbor to thrive.

For many years, the harbor has been classified as an ecological “Area of Concern” by the Environmental Protection Agency, meaning human activities have significantly impaired the area’s beneficial use.

Back in the presettlement days, the confluence of the Milwaukee, Menomonee and Kinnickinnic rivers featured wild rice beds, beavers, and lake trout, sturgeon and whitefish. But recovery doesn’t mean restoring that habitat, which is unrealistic, given how different things are now.

Instead, modern-day efforts are designed to plant a new environment, one where some fish species can thrive and Mother Nature, rather than just bulldozers and dump trucks, drives what’s happening under the surface.

The seeds are already there.

“Our harbor might be manmade,” Janssen says, “but it’s turned out to be an interesting ecosystem.”

Dow has spent the past two years cruising the harbor and the rivers that feed it in a boat equipped with side-scan sonar. The gear allows him to see the undulations of the riverbeds and lake bottom and identify the makeup of those areas. 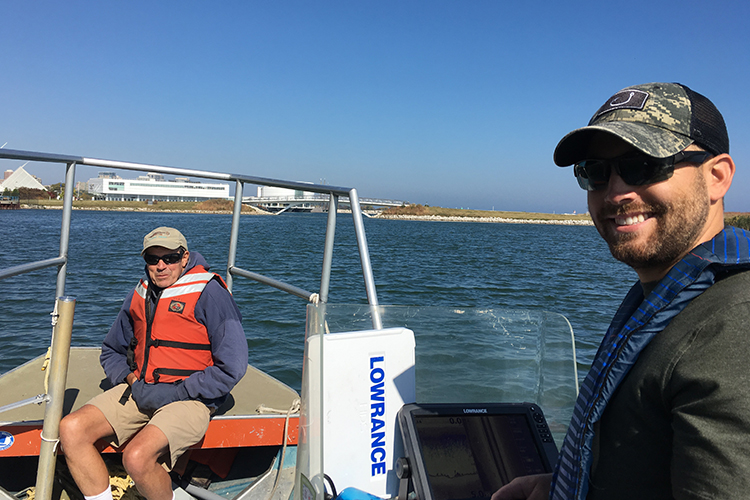 John Janssen (left), a professor in the School of Freshwater Sciences, and graduate student Brennan Dow have been collecting data to create an underwater map of Milwaukee's inner harbor. (Photo courtesy of Dan Egan) 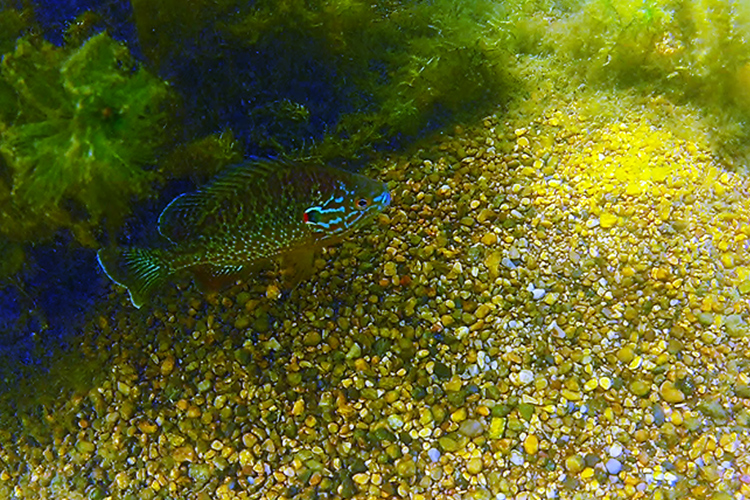 Having an underwater map of Milwaukee's inner harbor will allow scientists to pinpoint areas that provide good habitat for fish spawning, such as this bed of pebbles. (Photo courtesy of Brennan Dow) 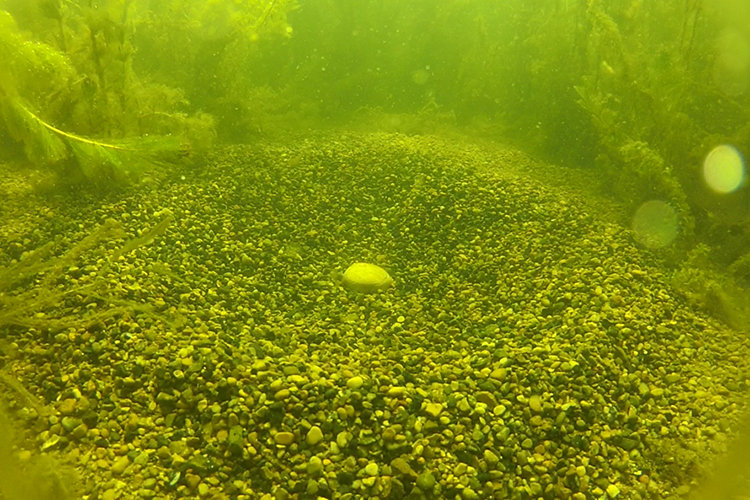 Finding spots in the harbor with pebble beds, where fish can lay their eggs, gives scientists clues on how to replicate those areas in other parts of the harbor and connecting rivers. (Photo courtesy of Brennan Dow) 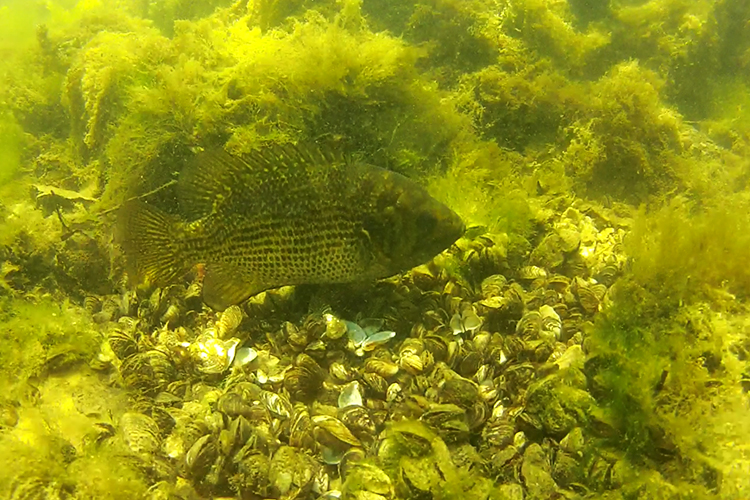 Ultimately, Janssen and his research partners see the map as a key step in a fish recovery program, and they believe it's critical to the harbor's overall revitalization. (Photo courtesy of Brennan Dow)

Dow has surveyed 37 miles of lakeshore and riverbank. He’s learned that some 21 miles of it feature low-quality fish habitats – typically silt or muddy bottom with little to no vegetation for adult fish to hide, or rocks and pebbles upon which fish can spawn.

But with his high-tech gear, he’s also found plenty of potentially fish-friendly areas in the waters ringed by smokestacks, concrete silos, salt piles and railroad tracks.

These are places where vegetation still thrives. Or where trees have tumbled and canal walls have crumbled, leaving behind rocky, wooded underwater areas in which fish can find sanctuary and rear their young.

He’s found discarded items from terra firma – such as construction materials or even a submerged motorcycle – that have become hiding places for small fish.

The radar-like side-scan sonar images give Dow a big-picture look, albeit a grainy one, at areas likely to support fish. But for a more detailed examination of fish-friendly areas, he needed to get closer to them. So he grabbed an underwater camera and diving gear, then plunged below to see what’s actually happening on the river and harbor bottoms.

A lot, it turns out.

In the Burnham Canal just south of the downtown We Energies power plant, Dow found dead trees and remnant concrete and, not coincidentally, bluegills and largemouth bass spawning.

In a Kinnickinnic River channel, where gravel apparently spilled from a nearby parking lot, he found baby bluegills and a pinky-sized native species called the blackstripe topminnow.

In the outer harbor, just off a pebbly beach at the Lakeshore State Park inlet across from the Summerfest grounds, he found northern pike and thousands of baby largemouth bass.

This is not just an exercise in observation.

“The idea is, you figure out where, say, largemouth bass are spawning,” Dow says, “and then you can try to replicate those areas in other parts of the harbors and rivers.”

Getting fish to spawn is just part of the problem. They still have to reach adulthood, which comes with its own set of obstacles.

For example, the gravelly beach near the Summerfest grounds might be the perfect place for baby fish to hatch. But prime adult habitat might be a half-mile of open water away. Along the outer harbor’s breakwall, food for adult fish swarms in the form of a non-native species known as the bloody red shrimp, which has exploded in numbers over the past decade. Baby fish must be able to reach those waters, however, which means having “rest stops” between the spawning ground and breakwall, and this is where mapping can help.

“The goal of this isn’t just to locate productive areas, but to then figure out how to bridge those gaps between them.”

The biologists turned to Beckmann to make the hidden underwater landscape visible. She’s creating interactive maps that will show where key elements are located, and grouping them in layers that can be turned on or off.

Users can look at the correlation of one kind of element with another. The tool can identify, for example, where vegetation and a specific temperature coexist by viewing both of those layers.

“The goal of this isn’t just to locate productive areas,” Dow says, “but to then figure out how to bridge those gaps between them.”

The data Dow and Janssen are collecting can be used to guide the installation or construction of fish-friendly areas – heavily vegetated shoreline, or vegetated lake bottom, or rock and gravel patches along riverbanks and harbor walls. That would help connect fish from an existing spawning ground to areas farther away where food is more abundant.

Janssen sees a fish recovery program as critical to the harbor’s overall revitalization. But just like the ambitious plans for the landscape now taking shape, having a strategy is essential.

“If we’re going to have some kind of ecological recovery,” Janssen says, “you have to have a map.”

John Janssen and Kim Beckmann sat down for an interview about the harbor project with WUWM-FM.