Research in the field of urban planning, particularly regarding transportation, has tended to focus on black and white populations. But the Latinx and Asian populations are two of the fastest-growing minority groups in the United States, a country that’s consistently growing more diverse. 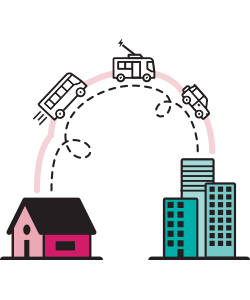 Hu’s recent research seeks to address that by looking at the employment and commuting patterns of Latinx and Asian workers.

She studied job accessibility by race and education level in Los Angeles by analyzing five different federal, state and regional data sets. She found that Latinx and Asian workers without college degrees tend to live relatively close to areas where jobs are located, and that such proximity can boost their economic prospects.

Hu also suggested that some job seekers who couldn’t afford long commutes might settle for lesser-paying positions closer to home. To avoid this scenario, perhaps a growing neighborhood might need additional transportation service in the future.

Although the study focused on Los Angeles, Hu says the results can help planners in other metropolitan areas with sizable Asian or Latinx populations. That includes Milwaukee.

According to a Metropolitan Milwaukee Association of Commerce study, Milwaukee’s Asian population increased 29% between 2010 and 2017, making it the fastest-growing race or ethnicity group in Milwaukee. The Latinx population rose 15% during the same period.
Ultimately, the hope is that jobs are accessible enough to attract the workers they need, and that workers have sufficient transportation options available. Finding ways to be more culturally sensitive, such as publishing schedules for a particular bus line in another language, can only help reach that goal.

“It’s important to understand these implications,” Hu says, “so that we can plan for equal and prosperous cities for everybody.”