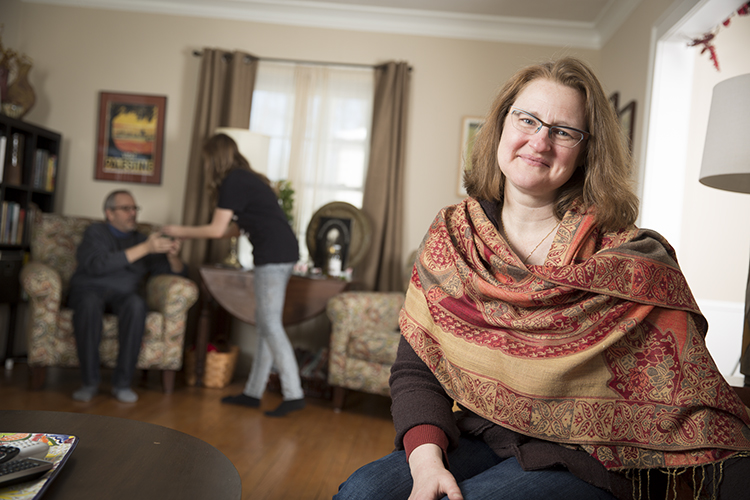 One of the nation's few experts in her area, UWM's Melinda Kavanaugh researches how caring for ailing relatives affects children ages 8 to 18, and how communities can support them. (UWM Photo/Troye Fox)

Their work has potentially serious consequences for society because young caregivers frequently drop out of school, affecting their future earning power, said Melinda Kavanaugh, an assistant professor of social work at the University of Wisconsin-Milwaukee and one of the nation’s few experts on young caregivers.

Kavanaugh recently published two papers on this topic, joining fewer than 15 other U.S. studies about children and teens who care for adults. Most youth are looking after parents and grandparents.

Sixty percent of the young caregivers in Kavanaugh’s research said the work affected their school attendance and performance. Many felt isolated after losing friends who didn’t understand what they were going through after school. Few received support from school employees.

One teen’s story was typical: Exhausted after a night of caring for her father, she fell asleep in class. A teacher slammed a book on the desk to wake her, and the teen felt judged as a “slacker.”

“The teen wished the teacher had asked her why she was sleeping in class,” Kavanaugh said. “It was important to her not to be seen as a slacker.”

A separate National Alliance of Caregivers study found that 72 percent of young caregivers between the ages of 8 and 18 took care of a parent or grandparent; 50 percent said they spent a lot of time doing so.

“They bathe them. Help them use the bathroom. Sit beside them in the evening to ensure that they don’t wander off or hurt themselves,” Kavanaugh said.

Society seriously examines the difficulties and benefits of being an adult caregiver, with extensive research, support groups and national funding. Yet young caregivers are “nearly invisible,” she said.

By acknowledging the extent of this situation, Kavanaugh said research such as hers can help society find ways to support young caregivers and their families economically, emotionally and educationally.

The problem disproportionately affects low-income and single-parent families, Kavanaugh said. Yet the Florida-based American Association of Caregiving Youth points out that national and local funding for caregiver support excludes those younger than 18 years old.

The ramifications are serious. An astounding 22 percent of high-school dropouts cite caregiving for a family member as the reason for leaving school, according to a 2006 study commissioned by the Bill and Melinda Gates Foundation.

One solution would be to create what Kavanaugh called “caregiver-friendly schools,” in which teachers and staff are trained to support such students.

As a clinical social worker, Kavanaugh first became aware of young caregivers while working with support groups for children with a parent with Huntington’s disease, at the Huntington Disease Center of Excellence, Washington University, St. Louis. She is conducting young caregivers research with the Wisconsin chapter of the ALS Association and collaborating with the United Community Center in Milwaukee on Latino family caregiver projects.