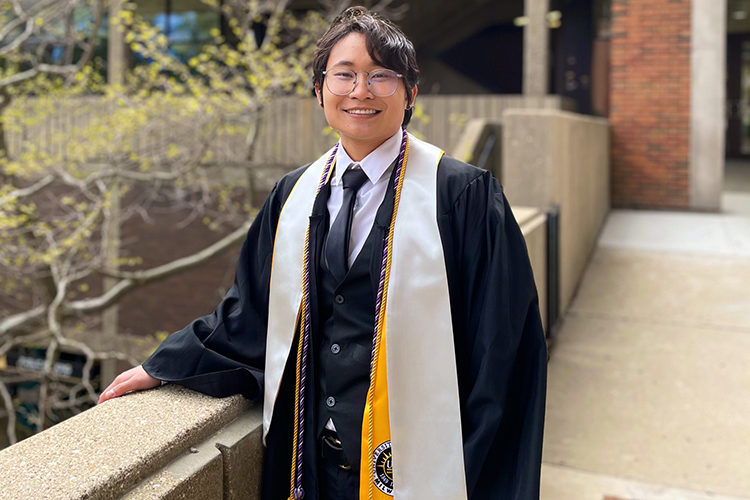 Roe Jing Draus, who graduated from UWM in May with a degree in architectural studies, will return to the university to pursue a master’s degree. (Photo courtesy of Roe Jing Draus)

Imagine being 6 years old, blind, on the autism spectrum and nonverbal. That’s Alex, a child who needs a well-designed environment to learn and thrive.

In response to that challenge, UWM architecture student Roe Jing Draus designed a space for Alex, who is imaginative but reflects the challenges that many children and adults face in buildings that aren’t designed with their needs in mind. Draus’ design, called Spatial Portrait, incorporated a variety of surfaces for the child to touch, an integrated button system to help him indicate positive and negative moods, and adaptable rooms with pocket doors to provide hidden areas for him to retreat and relax in times of distress.

Metropolis Magazine, which featured his design in its April issue, named Draus one of architecture’s Future100, recognizing him as one of the top 100 graduating architecture students in the country. Draus, who graduated in May with a bachelor’s degree in architectural studies, plans to continue on for a master’s degree. He was accepted in master’s programs at five universities, but chose UWM.

Receiving the recognition from Metropolis was an honor, Draus said, and he looks forward to continuing his work. “I’m really excited to design buildings that are more inclusive for people with sensory issues or other disabilities,” he said. “We need to improve buildings so they are more person-centered.”

The magazine highlighted how and why architects are beginning to respond to the ways people live, learn and work with designs that accommodate differences.

“About 1 in 54 children has autism spectrum disorder,” the magazine reported. “An even broader segment of the population — about 14% — identify as neurodivergent, a term that also includes dyspraxia, dyslexia, and attention deficit hyperactivity disorder, among others, meaning a considerable part of the population functions, learns, and processes information differently.”

Draus, a native of Madison, developed his interest in architecture early, influenced by his parents. His dad worked on construction projects and his mother is a self-taught artist, he said. “I took architecture classes in high school and that give me the opportunity to work with 3D modeling and graphics software.”

When it came time to choose a college, UWM was his first choice because he wanted to study architecture and stay in Wisconsin. UWM has the only accredited program in the state.

His studies and research at UWM, including looking at buildings in Milwaukee, have fueled his interest in inclusive design and neurodiversity, he said.

Draus is also earning a degree from the Honors College. “I really enjoyed taking courses outside my major, and it also allowed me to do a deep dive into other topics.” For example, he said, psychology courses helped him better understand neurodiversity, and a nursing class looked at how health care systems approach cultural diversity. “I was able to bring those insights back into my architecture classes.”

He credits Trudy Watt, assistant professor of architecture, with inspiring his interest in the area of inclusive design. “She really sparked my interest in this whole design approach. She was always giving me research to do that helped me understand it.”

A key part of working on inclusive designs,” Draus said, is working with an interdisciplinary team, and remembering to be mindful of the different perspectives of everyone involved before starting a project.

“There must be an inclusive, interdisciplinary and community approach within every level of design,” Draus said.

Watt, who nominated Draus for the award, commented on his project for the magazine article:

“Draus approaches his design for Spatial Portrait with clarity and creativity. His desire to address broader societal challenges with solutions that meet the needs of vulnerable populations is evident in his person-centered approach.”