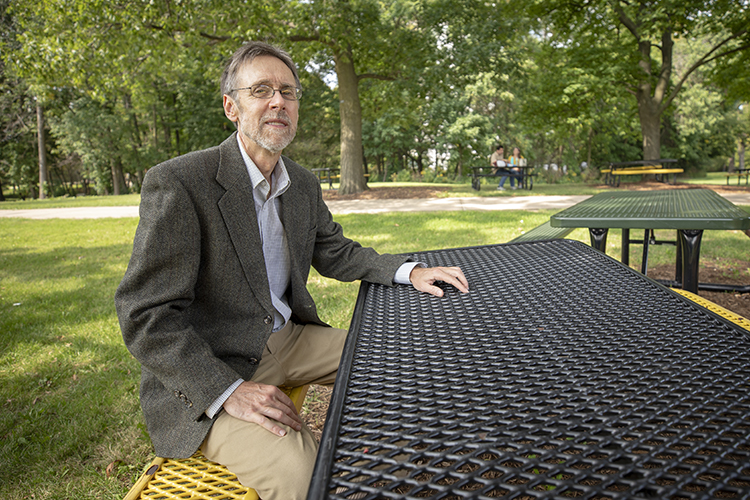 There are some parallels between the ideas of Milwaukee socialists from the mid-1900s and the democratic socialism that presidential candidate Bernie Sanders supports, says Joel Rast, an associate professor of political science at UWM. (UWM Photo/Troye Fox)

The Democratic National Convention is coming to a city once known for its prominent ties to socialism.

Milwaukee was home of Rep. Victor Berger, who in 1910 became the first member of Congress elected on the Socialist Party ticket. The city had three Socialist Party mayors in the 20th century, starting with Emil Seidel, who served as mayor from 1910-1912 and was the first Socialist to govern a major American city.

Daniel Hoan had a 24-year tenure as mayor ending in 1940, winning 10 straight citywide elections as a Socialist before later joining the Democratic Party during World War II.

The socialist influence in Milwaukee politics has disappeared, its sway eroding after the last of the Socialist Party mayors, Frank Zeidler, left office in 1960 after 12 years. But the arrival of the Democratic convention in July, along with the political philosophy of presidential candidate Bernie Sanders, presents a fresh opportunity to look back at the historical connections to socialism.

There are some parallels between the ideas and thinking of Milwaukee socialists from the early to mid-20th century with the democratic socialism that Sanders says he supports, said Joel Rast, an associate professor of political science at UWM and director of urban studies in the College of Letters & Science.

Socialism in Milwaukee drew the nickname “sewer socialism” because it focused on infrastructure projects. Rast described it as the idea that government’s role was to supply  infrastructure that helped not just people, but also businesses, to be able to perform better.

“And so they put a big emphasis on building things like streets and bridges. The kinds of things that businesses need to do well,” Rast said. “These are things that most people are not going to have a big problem with – better infrastructure.”

There was an emphasis on addressing market failures and recognizing government as a force to address shortcomings, Rast said.

“There has been a tendency, even among some Democrats (today) to minimize the role that government can play as a positive force in society, to talk about how we can streamline government,” Rast said.

Conversely, Sanders has spoken out about government needing to play a stronger role in areas like health care.

“The private sector is not supplying it in a way that’s efficient or cost effective,” Rast said in using Sanders’ health care proposals as an example. “So why shouldn’t government step in and do that? Maybe government can do that better.”

For instance, Zeidler saw public housing as a big priority not just to help the poor but also working-class people. The view stemmed from a housing shortage after World War II similar to those that other cities experienced around the country.

“So what Zeidler thought was let’s build public housing, because the private market is not supplying enough housing,” Rast said.

“So it’s this notion of government being this legitimate force in society to step in where the market fails and do the job in place of the private sector,” Rast said. “It’s very similar to what Bernie Sanders is arguing.”

The latter years of Zeidler’s tenure as mayor, which took place as the Cold War escalated between the United States and the Soviet Union, were marked by political attacks that he was a Communist sympathizer.

“The Cold War came along and made socialism a dirty word,” Rast said. “No liberal Democrat, or even somebody who was sympathetic to what socialists were doing, was probably going to label himself as a socialist.”

Today, the socialist influence on southeastern Wisconsin politics is very minimal, Rast said. Milwaukee is a Democratic stronghold. Parts of downtown and the East Side are thriving with new construction, though poverty and segregation have long been problems.

“I would say the socialist kind of thinking would be that ‘We have to lift those people up somehow. The market is failing these people in Milwaukee. What can we do to redirect resources to benefit those parts of the city more,’” Rast said. “We’re just not seeing that now. It’s just not happening.”