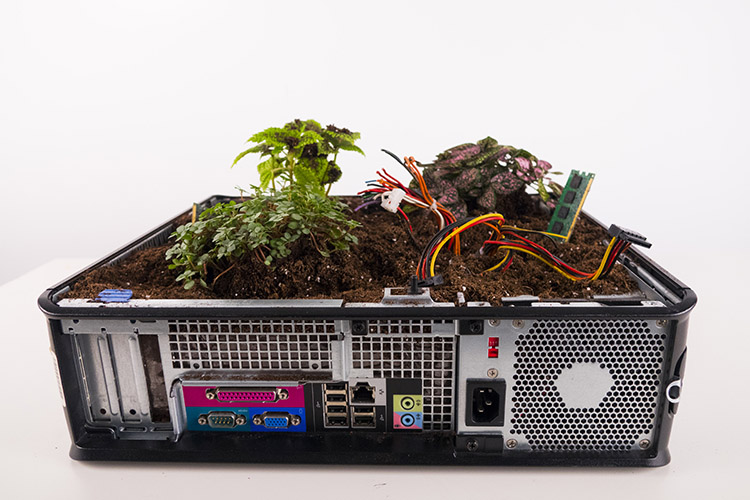 Obsolete computers and phones are tossed in the garbage. But their shells linger, taking hundreds of years to decompose. How will our world adapt to the growing amount of e-waste?

UWM associate art professor Nathaniel Stern explores these issues in his work. And over the summer, he and three undergrad students traveled to Durban, South Africa, and presented a few answers at the 2018 International Symposium of Electronic Art. Stern showcased his art project, “Durban Server Farms,” which is part of his much larger project “The World After Us.”

With old computers and other technological equipment repurposed as planters for native South African plants, Stern showed what it may look like if we could find a use for those products beyond their intended use. The imagery created with these planters not only gave ideas for repurposing our waste today, but also showed what our world may look like after nature reclaims that waste.

Stern hopes the displays get people to think differently about what we do with this equipment once it has exhausted its usefulness.

“Art as opposed to design is less about a message than it is a question,” said Stern.

Stern collected much of the e-waste used in the project from Andrew Avery-Johnson at UWM Surplus as well as information technology students led by J. Dietenberger, a student affairs and IT services instructor.

“Andrew was amazing with his donation of computers, parts, and ideas,” said Stern. “And J. also spent days with us prepping and gifting raw materials as well.”

Dietenberger and his team had to follow a rigorous process of “cleaning” the computers and other electronic devices of any information that they held before giving them to Stern.

UWM has a process of using computers and other electronic devices to their maximum life cycle, but when they do reach a point of being outdated, they are destroyed. The process includes wiping them of any sensitive data and destroying the interior components before being sent to the landfill.

“The students executed this process flawlessly,” Dietenberger said. “The computers were completely wiped; they were dead.”

With another thought in mind and not wanting to add to the growing amount of electronic waste in the garbage, Dietenberger offered Stern e-waste for the art project he and his team had been working on, which he had seen the professor’s Facebook page.

In preparation for “The World After Us,” Stern and his team experimented with different ideas of what this e-waste may look like in a distant future where it is no longer used. The team attempted to create “phossils,” a play on the words of phones and fossils with different techniques of aging the computers and phones.

The students gathered in Stern’s studio and cooked them in kilns, blended them in Vitamixers, even froze them at subzero temperatures.

“We were smashing, burning them, torching,” said Stern. “We were having a blast.”

Stern even cooked remains of the e-waste with clay. Once the ceramic materials hardened, Stern and the team staged a kind of archaeological dig.

This experiment left behind a replication of fossilized remains that you could find at a museum. Yet these weren’t dinosaur bones or ancient marine life remains — these were phones and computers with an aged look to them. The e-waste now appeared as if it had survived through a millennia of change and waited to be repurposed or reclaimed.

Once Stern and the three students — Samantha Tan, Olivia Overturf and Jenna Marti — finalized their preparations, they travelled to South Africa in June for the International Symposium of Electronic Art. The students’ travel was supported by the Office of Undergraduate Research.

Gathered in a gallery in Durban, South Africa, the team spent three days constructing planters of old computers and phones. Gardens of plants stretched down the aisles, each leafy exotic plant growing from the remains of this e-waste.

As the symposium began, Stern’s vision had come together, with the question, “what else can these media be?” conveyed by this display.

During the event, Stern and the students also held a three-day workshop where people could make their own planters.

“I wanted to see how people feel, think and act around technology and nature together,” said Stern.

Once the event was over, Stern donated the projects that were left from the display to local activist groups in the area.

“I wanted to spread wonder, and joy, and curiosity, and beauty,” said Stern.

“The World After Us” is supported by a UWM Research Grown Initiative grant, and will see a much larger exhibition and catalog premiere in spring 2020. 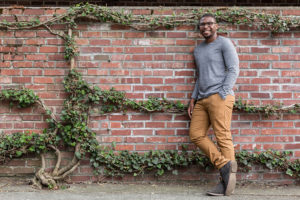