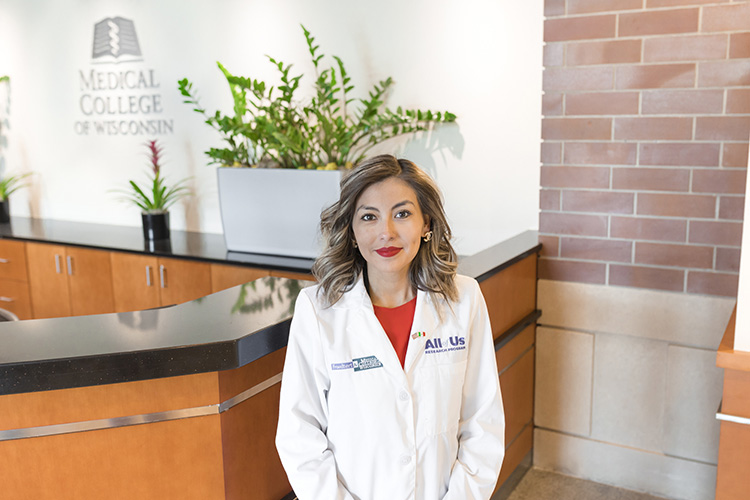 After completing a post-baccalaureate program in premedical studies at UWM in 2017, Carla Elena Echeveste joined the Medical College of Wisconsin, where she works as an associate clinical researcher. (UWM Photo/Elora Hennessey)

Carla Elena Echeveste’s life plan turned in a new direction when her mother was diagnosed with breast cancer.

Echeveste was a sophomore at Alverno College studying accounting and mathematics, with a job already lined up at a top public accounting firm, but she soon found herself the go-between for her mom, whose primary language was Spanish, and the health care system.

“I was the middleman between her and her surgeon,” Echeveste said.

Spanish-speaking medical professionals are in short supply, Echeveste explained. Only 6% of physicians are Hispanic, and most health professionals don’t speak Spanish or other languages.

Her mother’s experience opened her eyes to the need for people who could act as liaisons between non-English speaking patients and the medical community, she said.

“It’s amazing how understanding the culture and language can alleviate anxiety and build instant trust,” she said.

While Echeveste also had an acceptance to medical school at that point, the costs were out of reach for her and her family. Her parents immigrated from Mexico 37 years ago, raising Carla and her sister in Milwaukee.

Echeveste became involved in internships and other activities to learn more about the health care field. She was an intern at the Cancer Center at the Medical College of Wisconsin and a Rural Urban Scholar in Community Health for the UW-Madison School of Medicine and Public Health.

As part of her effort to prepare herself as a health professional, Echeveste came to UWM for a post-baccalaureate program in premedical studies and research in cognitive neuroscience. She chose UWM at the recommendation of her sister, Celina, a School of Education graduate.

“That was the best decision,” she said. She particularly remembers her advisor in the program, Patty Cobb, who was incredibly helpful and supportive. Echeveste got additional grounding in the sciences through the WiscAMP program (also known as STEM-Inspire). Her mentors in that program, Anique Ruiz, and Anja Blecking, associate professor of chemistry, also encouraged her to continue her work in the science and health fields, including competitive symposiums at Harvard and Yale.

After completing the post-baccalaureate program at UWM in 2017, Echeveste joined the Medical College of Wisconsin, where she works as an associate clinical researcher. That has given her the opportunity to further her goal of serving as a liaison between the health care profession and the Hispanic community.

She volunteered her time with ophthalmologist Jane Collis-Geers, alum of the Medical College of Wisconsin, in the ophthalmology clinic at the Sixteenth Street Community Health Centers, which primarily serves a Hispanic population. That work brought her full circle — “I remember going to the clinic as a child and now I am serving the same patient population.” Her primary role was as a scribe, helping compile and record medical information, but she was also able to talk to patients in Spanish to help alleviate their concerns and translate questions.

Currently she is working with the All of Us Research Program, a national research project funded through the National Institutes of Health. All of Usis recruiting one million people from diverse backgrounds to contribute DNA samples and medical records anonymously. The Medical College of Wisconsin is one of the Wisconsin partners in the project. The long-term goal is to gather health and genetic information that can be used to develop more precise medical treatments and advance medical breakthroughs.

Most biomedical research has been done on middle-aged white men, said Zeno Franco, an associate professor at the Medical College, a leader of the research and one of Echeveste’s mentors. However, drugs and other treatments may work differently on women and on people from other cultures, making it important that they are involved in such research.

In her role in this project, Echeveste serves as an ambassador to minority and bilingual communities, who for many reasons are often reluctant to see a doctor, let alone get involved with medical research.

As part of her work at the Medical College of Wisconsin, Echeveste has also had the opportunity to get involved with other research. This spring she has had papers published in two journals. She was one of a number of co-authors of a piece on the use of mobile technology to help veterans with post-traumatic stress disorder. In June, her first solo research paper, a review of literature on the nutritional value of berries in combating a stem cell disorder that can progress to acute myeloid leukemia, was published.

Echeveste is active in the community. She was named Woman of the Year in STEM for the Zonta Foundation, Ms. Mexican Fiesta Ambassador for 2016-2017, UMOS honored her as Hispanic Woman of the Year in 2017, and last year, she represented Wisconsin at the White House as part of Hispanic Heritage Month.

She serves on the board of the Milwaukee Area Health Education Center and volunteers for the American Cancer Society. She also shares her time as a conversational partner for medical professionals learning Spanish.

Her program at UWM was a key part of her efforts to become a medical professional who can serve her community, she said.

“I loved my time at UWM and how it has helped pave my academic trajectory. UWM has been absolutely instrumental to my development.”