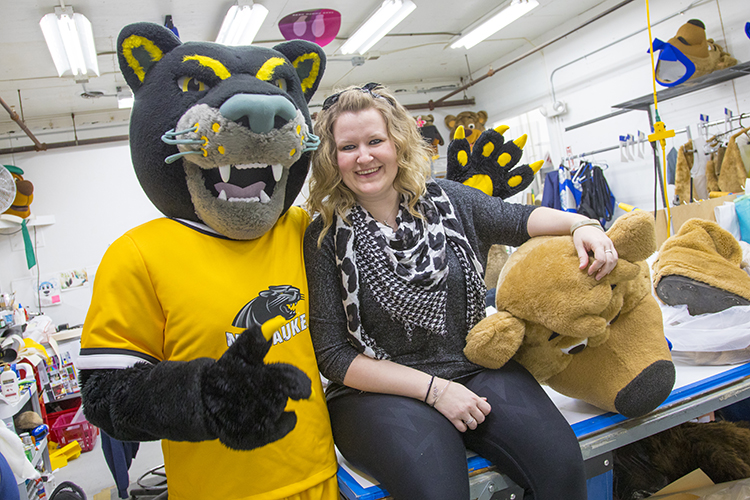 Brittany Jacob poses with UWM’s Pounce, one of the many mascots built and maintained by Olympus Group on Milwaukee’s northwest side. (UWM Photo/Pete Amland)

Behind every great mascot, there’s a team.

Not just an athletic or corporate team, but a team of designers, fabricators, sewing machine operators and others who create mascots like Pounce or Bernie Brewer or Ronald McDonald or Jellystone Park bears or the Geico Gecko or Andy Armadillo.

Brittany Jacob, a graduate of UWM’s Washington County campus, leads the team that builds these and hundreds of other mascots for Olympus Group on Milwaukee’s northwest side. Her workplace is filled with sewing machines, designs, patterns, bolts of fabric, molds and almost completed mascots – a Milwaukee Brewers racing sausage hangs over one workstation.

Jacob became interested in theater and costume design while she was a student at the Washington County campus, now part of UWM. “I grew up in West Bend, and it was right there.”

The two-year campus gave her a chance to take a lot of different classes and explore her interests. “It gave me time to figure out where I wanted to go. It helped me get my general education classes out of the way so by the time I transferred to UW-La Crosse, I had just two and a half years of pure theater classes.”

A ‘behind the scenes person’

The Washington County campus has a theater, called Theater on the Hill, and she was in there all the time, she recalled. “I actually started volunteering when I was in high school.” After getting to know theater professor Brad Ford, she started out building sets, lights and helping with costumes.

“I auditioned for one play and found it was not my calling,” she said with a laugh. “I was a purely behind the scenes person.”

She earned her BS in Theatre Design with emphasis in costumes from UW-La Crosse, then went on to Florida State University, where she earned her MFA in Costume Design.

That led to her job at Olympus Group, where she started out seven years ago creating body costumes for the mascots as a sewing and patterning technician — “making everything from the neck down,” she said.

After becoming involved in a redesign of Ronald McDonald, she moved up to become sewing lead, then co-manager of the mascot production department, then manager of the mascot production department. She is now the Mascot and Production Sewing Manager, overseeing not just the sewing of costumes, but also the fabrication of heads and foam shape costumes and head molds. She also oversees the production sewing department that sews flags, banners, bedding and large frames for trade shows.

A long process to create a mascot

The process of creating a mascot is complex and involves a whole creative team, Jacob said.

Customers come to the company with an idea – sometimes a cartoon, a drawing or even a sketch on a napkin. After the company accepts the contract, the team of designers gets busy figuring out how to create the mascot.

“We need to design a costume that actually fits on a human – some of the drawings we get are not proportional,” said Jacob. “We also need to have them be able to move and be flexible and let the person inside breathe and see.”

Some of those requirements can be quite challenging, she said, recalling one blue frog mascot that had to sky-dive.

Once the customer approves the design, team members split up the work, said Jacob. That involves picking out materials, sewing clothing and sculpting the head — which is then turned into a plastic mold, which is then covered with fabric. Other members make full body costumes, usually out of foam.

Some of the newer mascots include lights and sound. The team has made a water heater mascot that lights up, a forklift with forks that move up and down, and a buffalo with eyes that blink.

“Those have a tendency to be a lot of fun,” said Jacob. “We’re always trying something new.”

As a final step, the team does a photo shoot of each new, completed mascot.

All of the mascots are custom made for a customer; but some are made in quantity for businesses that may have numerous outlets, Jacob said. “We’ve probably made 900 Andy Armadillos (the mascot of Texas Roadhouse) over the years.”

Olympus, of course, has its own mascot, Ollie, that makes appearances at company functions, passes out ornaments at Christmas, helps out at birthday parties and takes a stroll down Candy Cane Lane.

Although Jacob doesn’t do as much hands-on work as she did when she worked on the sewing production, she still jumps in when they’re busy.

Does she have a favorite?

“Ronald McDonald is one of my favorites because I was so involved with that redesign.”