Gregg Jamison speaks in reverent tones about how his research contributes to the poignant mission.

The UWM at Waukesha assistant professor of anthropology is part of a team working with the Defense POW/MIA Accounting Agency to find and identify the remains of soldiers missing overseas to bring them home.

More than 72,000 World War II service members are still unaccounted for, but the U.S. Defense Department says that the bodies of about 30,000 may be recoverable.

“This is far and away the most rewarding thing that I’ve ever done professionally,” Jamison says. “It’s a way for me to recognize and honor the sacrifice of our armed services personnel, particularly those who gave their lives.”

Jamison joined the UW-Madison Missing in Action Recovery and Identification Project in spring 2018. As the scientific recovery expert, he’s in charge of on-site archaeological decisions.

Researchers also use ground-penetrating radar and other remote sensing techniques to shed more light on how a particular aircraft crashed. Understanding how a crash site formed helps researchers figure out where to conduct excavations and how deep to dig.

In August 2018, Jamison was part of the team that recovered the wreckage of 2nd Lt. Walter “Buster” Stone’s P-47 Thunderbolt and his remains from a crash site near Saint-Omer, France. 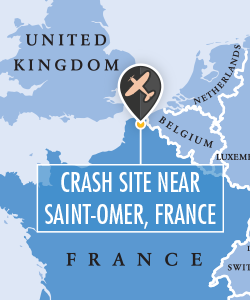 Genetic testing later confirmed Stone’s identity, and in May 2019, the pilot was interred in his hometown of Andalusia, Alabama.

Jamison worked on another case in Belgium during the summer of 2019. He supervised the site survey and test excavations, recorded data and is using geographic information system mapping tools to uncover more information about the crash site.

That, in turn, could help determine what happened to the still-unidentified missing crew member.

While in Belgium, Jamison and his colleagues visited a U.S. military cemetery that had memorials to missing soldiers. They found one with Stone’s name and a small bronze rosette next to it that signified he’d been found.

“It was very, very emotional,” Jamison says. “It really, really brought home how important this is.”