Aislinn Sanders is the recipient of the Ritzenthaler Museum Research Internship Award. This summer (2021), she began research on a collection of Thai silver bowls and boxes, dating to the late 19th and early 20th centuries, housed at the MPM. These pieces were gifted to foreign ambassadors, officials, and royalty as a sign of welcome on behalf of Thailand’s royal family and government. The collection was acquired by Dr. Louis Schapiro, a Milwaukee native who studied tropical diseases at the turn of the 19th century. Schapiro served in a number of countries including Costa Rica, Panama, and Thailand (then Siam) as a member of the Rockefeller Foundation’s International Health Board. He briefly taught at Marquette University as an assistant professor of tropical diseases. Schapiro was well loved in Thailand where he served as Medical Advisor of Public Health to the Siamese government from 1931-1932, acquiring the items in this collection at this time. Schapiro died in 1932 and he received a funeral ceremony on behalf of the Siamese government akin to that of a member of the royal family.

The main themes depicted on the pieces include animals from the Chinese zodiac, scenes from the Thai Ramakien (the Thai version of the Hindu epic Ramayana), and auspicious animals, flora, and patterns. In Thai culture, many of these patterns have a specific meaning, usually of welcome or good luck, and many of these items served a specific ceremonial or religious purpose. For this reason, Aislinn has chosen to research thematic representation and the functions associated with the MPM’s Thai silver collection. 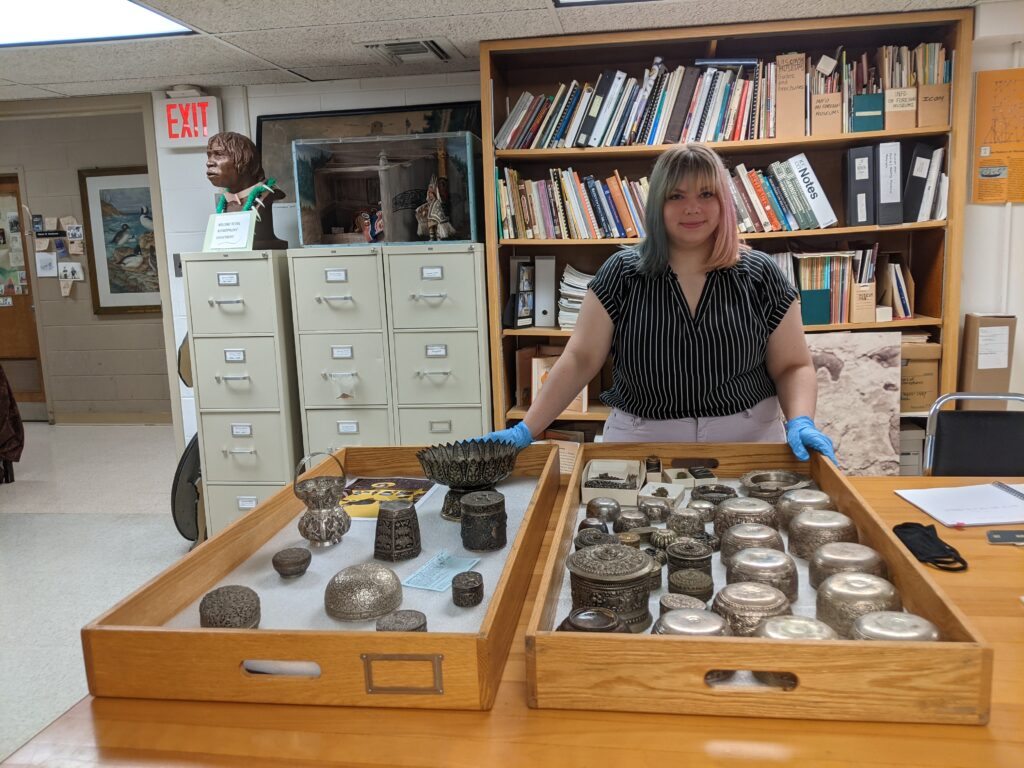 Aislinn Sanders is the 2021 recipient of the Ritzenthaler Museum Research Internship Award.

In this research, it was important to first grasp a solid knowledge of Thai history especially as it was influenced by other cultures to form a completely distinctive Thai style of artwork. Thailand’s history is somewhat different than other Southeast Asian countries as any colonization attempts from Western powers such as Britain and France failed to take shape. Though Western powers never controlled the country, influence from Western fashion still seeped into Thailand’s arts production.

One thing that makes this research particularly challenging and important is the fact that there is sparse literature available on Thai silver outside of Thailand. Few academics have studied the material and process in depth since silver from countries such as China have overshadowed Thailand’s industry. From a collector’s standpoint, Chinese Export Silver has become the standard for the region and much of Thailand’s silver has been rebranded as such, making it difficult for non-Thai researchers, art historians, and collectors to find pieces which originated in Thailand.

Additionally, few surviving pieces exist from before the 19th century. Silversmiths in the region, experiencing a shortage of naturally occurring silver, melted down old pieces and foreign silver coins to reuse the material for new projects. Because of this practice, finding the evolution of certain motifs can be quite difficult as there is often not an older piece to compare to.

As a result, this research will be beneficial to other researchers and will help the MPM to better understand a portion of their collection which will in turn, impact the interpretation of exhibits and development of programs. Aislinn would like to see this thesis as a jumping-off point for other researchers to continue studying and documenting this dying art form and process.