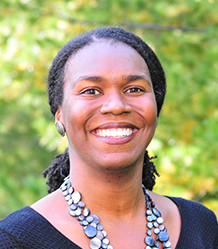 On April 29, Professor Miriam Petty (Northwestern University, Radio/Television/Film) will be coming to UWM for a public lecture. Professor Petty’s book, Stealing the Show: African American Performers and Audiences in 1930s Hollywood, about to be released by the University of California Press in March, studies African American actors including Louise Beavers, Fredi Washington, Lincoln “Stepin Fetchit” Perry, Bill “Bojangles” Robinson, and Hattie McDaniel to reveal the “problematic stardom” and the enduring, interdependent patterns of performance and spectatorship for performers and audiences of color. Professor Petty’s work in general focuses on American film history and Black popular culture.

Professor Petty’s lecture will be at 2 PM in Curtin 368; prior to that, there will be an informal gathering for graduate students (breakfast will be provided) at 10 AM in CRT 368 with Professor Petty. This event is co-sponsored by the Program in Film Studies; the Departments of English, Africology, and Urban Studies; Cultures and Communities; and a grant from UWM’s Year of the Humanities.