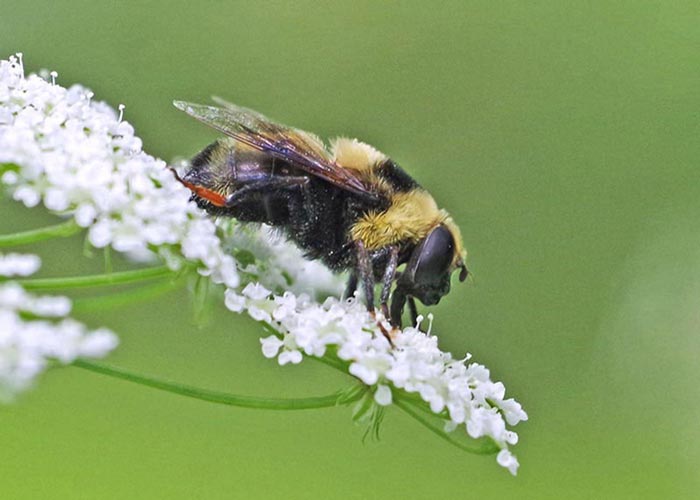 Howdy BugFans, It’s no secret that the BugLady is enthralled by syrphid/hover/flower flies (family Syrphidae), those often-exquisitely-decorated little flies that mimic a variety of wasps and bees and are featured in so many of her “Summer Survey” episodes. This summer… Read More 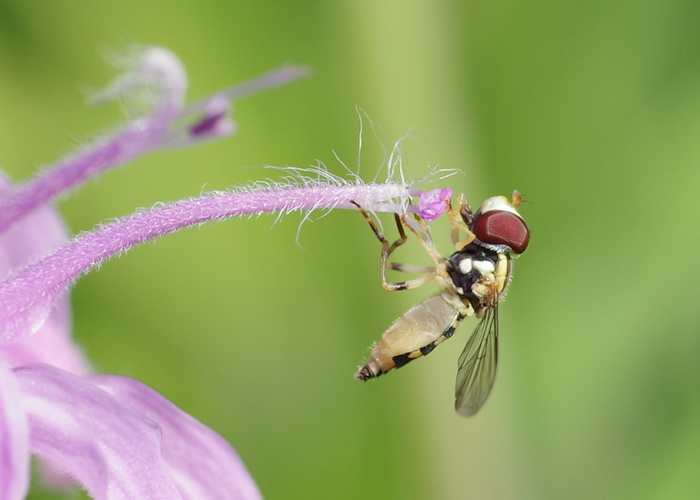 The BugLady hopes that you’ve been getting out on the trail and drinking in the lushness of the summer. Subjects of this summer’s survey include wasps, aphids, syrphids, and katydids.

The Eastern Calligrapher wear exquisitely etched patterns around/partly around their abdomens. At 6 to 7 ½ mm long, the Eastern Calligrapher is mid-sized for its genus. Like many syrphids, they mimic bees and wasps but have no stinger. A quick wing-count will separate them (wasps and bees have four wings, and flies have only two). They add to the deceit by making a buzzing/droning sound. Adult syrphids feed on pollen and nectar, especially on large, flat, pale flowers, and they are considered pollinators even though they don’t have specific pollen-carrying structures.

Here are some “x-flies” that she was able to track down—or stumble upon by accident. Once again, we celebrate the bugs that are neither big enough nor bad enough nor good enough nor flashy enough to inspire study–or even, in many cases, to have been assigned a common name.

Dandelions produce both nectar and pollen and so are appreciated by wildlife, especially early bees and butterflies (100 species of pollinators have been tallied). The BugLady has been dawdling among dandelions to see who else appreciates them. She saw representatives of 8 kinds of hymenopterans (ants/bees/wasps), 4 kinds of flies, 3 of arachnids (spiders and spider relatives), and 1 beetle. Seen, but not photographed, were a few cabbage butterflies.

Syrphid flies are a large and widespread fly family whose members range from small-and-delicate to large-and-clunky honeybee mimics called drone flies. Adults feed on nectar and pollen, mostly from yellow or white flowers, and on aphid “honeydew,” and they’re considered important pollinators despite the fact that they’re not designed to carry as much pollen as either wild bees or honeybees can.

The BugLady would like to dedicate this episode to the late (great) Cornell Professor Richard B. Fischer (January 19, 1919 – August 7, 2005) who taught the BugLady how to sneak up on insects (no bobbing or weaving, just slow and steady and straight ahead.

The BugLady spent some very warm days among the Cup plants, those jumbo prairie plants whose opposite leaves join around the stem resulting in a small reservoir that often holds rain water or dew. The undersurface of the tender top leaves of many Cup plants were wall-to-wall with (insert creepy adjective here) red aphids—a cast of thousands—and there were some very cool supporting actors.

The BugLady has been out with her camera, walking non-aerobically and peering into plants. The “peering” has resulted in some interesting (if blurred) sightings (her macro lens is getting a bit cranky). Amazing things have been happening on milkweed, probably spurred by a banner crop of aphids on the leaves.

People get excited when pussy willows whisper the spring. The BugLady thinks it’s more fun to skulk among the pussy willows when they are actually blooming (the gray, fuzzy “bud” is the future female catkin), ogling the diversity of insects that come to visit. Willows are dioecious (separate house), bearing their male and female flowers on different plants