Book Talk with Rachel Ida Buff: “A is for Asylum-Seeker: How to Talk About Migration in Troubled Times” 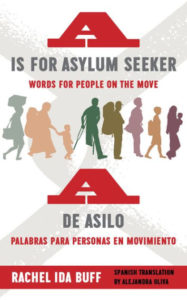 Join us for a conversation with History professor Rachel Ida Buff about her newly published book A is for Asylum-Seeker: Words for People on the Move/A de Asilo: Palabras para Personas en Movimiento (Fordham University Press, 2020).

Across the globe, millions of people leave their nations of origin as a result of political, economic, and environmental peril. Rising racism and xenophobia have led to increasingly harsh policies in the US and elsewhere. During the global pandemic, migrants who are incarcerated in detention facilities or forced to take shelter in temporary quarters contend with the additional threat of illness and infection.

A is for Asylum Seeker/A de Asilo reframes key words that describe people on the move, from “asylum seeker” to “zero-tolerance policy.” Written in both English and Spanish, this glossary provides an intersectional and historically grounded consideration of the words deployed in enflamed debate about migration, offering a valuable perspective on the challenges and aspirations of people on the move everywhere.

Buff will be joined in discussion by the book’s translator, Alejandra Oliva, who is also the Communications Coordinator at the National Immigrant Justice Center in Chicago.

Rachel Ida Buff teaches history and comparative ethnic studies at UWM.  A frequent contributor to mass media outlets, her most recent academic book was Against the Deportation Terror: Organizing for Immigrant Rights in the Twentieth Century (Temple University Press, 2017).

Alejandra Oliva is an essayist, embroiderer and translator. She lives in Chicago where she works in communications for the National Immigrant Justice Center. You can see more of her work at olivalejandra.com