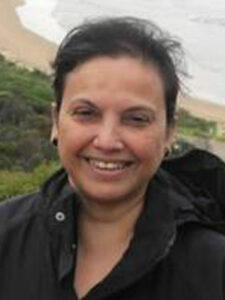 On April 9, 2021, Dr. Raka Shome delivered the 2020-21 Rhetorical Leadership lecture, which she had titled “Cleaning the Nation:  National Purification, Contemporary Hindu Nationalism, and the Politics of Gender,” virtually using Microsoft Teams. Her lecture focused on the rhetorical logics of contemporary India nationalism that is being forged under the current right wing Prime Minister Narendra Modi and his BJP party. Through a focus on this movement, the lecture particularly addressed how the (Hindu) female body–and specifically the figure of the mother (Mother India)–often comes to stand in for the clean national body that must be honored and protected from defilement. This has implications for writing out of the national narrative the figure of the Dalit, GLBT populations, and other non-Hindu populations.

This project emerged from Shome’s deep concern and sadness about the violent solidification of Hindu nationalism in India and the ways in which Hindutva (Hindu ideologies) is tearing down the fabric of democracy and dialogue in contemporary India under the current government of Narendra Modi, and its larger party base.

Dr. Shome is the Harron Family Endowed Chair and Professor of Communication at Villanova University. Prior to this, she served as a Senior Visiting Fellow at National University of Singapore. She has also held full time faculty appointments at London School of Economics, University of Washington and Arizona State University.

Her research is in areas of nationalism, postcoloniality, non-western modernities, transnational feminism, and the global south. She has also written on the transnational politics of knowledge production, and rethinking cultural studies from the Global South.

Dr. Shome has published numerous articles and book chapters in leading journals and anthologies in the field of Media and Communication Studies. Many of her essays are highly cited and have been reprinted in anthologies in our field and beyond. She is the author of Diana and Beyond: White Femininity, National Identity, and Contemporary Media Culture (University of Illinois Press, 2014), a book that examines how new sets of postcolonial relations in contemporary western cultures are mediated through images of white femininity (especially privileged and celebrity white women).

Professor Shome has received numerous awards for her research, the most recent being the Douglas Ehninger Distinguished Scholar in Rhetoric and Public Address from National Communication Association (NCA). She has been honored in NCA with Distinguished Scholar recognition from the Rhetoric and Communication Theory Division, the Charles Woolbert Award, the Karl Wallace Award, and the Distinguished Scholar Award from Cultural Studies Division of NCA and International and Intercultural Division. She has also delivered several keynote talks and plenary speeches globally in various universities and international conferences.