The Rhetorical Leadership program sponsors nationally-known scholars of rhetoric to lecture on various aspects of leading people through language and arguments rather than formal authority. 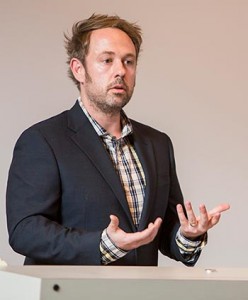 The 2015 Rhetorical Leadership Lecture was presented by Associate Professor Jeremy Engels of Pennsylvania State University, who studies democracy with a particular interest in classical and contemporary practices of the care of the self. His recent work includes two books: The Politics of Resentment: A Rhetorical Genealogy (2015) and Enemyship: Democracy & Counter-Revolution in the Early Republic (2010).

In this talk entitled “The Rhetoric of Gratitude: From Debt to Freedom,” Dr. Engels turned his focus toward the positive and proactive. He established that, repeatedly and resoundingly, from the halls of academia to the pop culture salons of morning talk shows to the folksy pages of self-help books, gratitude is heralded today as the single most important emotion for living happier, healthier, more fulfilling lives. He argued that anytime something, be it a product or a drug or an idea or an emotion, is said to be a universal panacea for what ails us, we must look carefully at what we are being sold to make sure it is not snake oil.

While gratitude is offered to Americans with the best of intentions, Professor Engels believes that gratitude as it is generally understood in the West–as a feeling of obligation or indebtedness to someone who has given us a gift or done us a favor–fails to address our genuine causes of suffering. This gratitude is not the antidote to zombie capitalism and relentless consumption that its proponents claim. In this presentation, he offered a critique of what he called “the debt of gratitude” and discussed how we might take gratitude back from the jaws of debt.