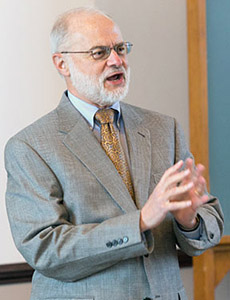 In this lecture, Zarefsky dissected President Lincoln’s challenges in persuading Congress to pass the 13th Amendment, a move that would abolish slavery permanently and throughout the nation not just during the course of war or only in the seceded areas. The Civil War’s impending end made the task urgent, even as seats lost in the recent election and the remaining members’ prior voting records cast doubt on prospects for Lincoln’s success. Professor Zarefsky argued that Lincoln’s rhetorical leadership in this situation combined high-minded appeals to principle and pragmatic tactics as two sides of a single coin. Most importantly, Lincoln employed rhetoric to mold public sentiment through his narrative construction of history, inoculating people with how they might respond to prejudicial arguments rather than advocating more directly, and his use of analogies.

Dr. Zarefsky has served as president of the National Communication Association, Rhetoric Society of America, and the Central States Communication Association and is former Dean of Northwestern’s School of Speech. He has published 6 books and over 70 articles. Zarefsky has earned numerous awards for his scholarship, including two Winans-Wichelns Awards for Distinguished Scholarship in Rhetoric and Public Address, one for his book on President Johnson and one for his book on the Lincoln-Douglas debates.