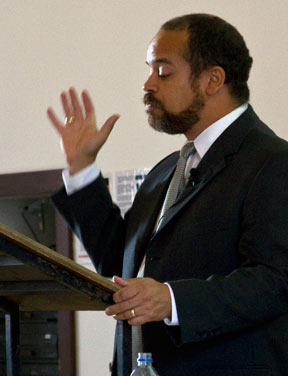 He posited that rhetorical leadership, which is often thought to originate from political and cultural elites, is sometimes little more than the rearticulation of widespread social narratives. He argued first that, after the Civil War, U.S. citizens debated the meaning of freedom and citizenship through narratives about African-American behavior. Second, Professor Wilson contended that contrasting narratives led to contrasting interpretations of social mimesis (imitation) in Southern communities. Some European Americans viewed the growing similarity between blacks and whites as a threat and responded violently. Southern white leaders who were not violent often rehearsed the narratives of those who were; consequently, rhetoric functioned not as an alternative to violence but as an explanation for why intimidation, whipping, murder, and arson were necessary. Finally, Professor Wilson speculated on what kind of rhetorical leadership via narratives might have helped to interrupt this cycle.

Dr. Wilson is Associate Professor of Communication Arts & Sciences at The Pennsylvania State University. His research specialty is public discourse regarding race relations. His 2002 book Reconstruction’s Desegregation Debate won both the Winans-Wichelns’ and the Nichols’ national book awards. He publishes in journals including Quarterly Journal of Speech and Rhetoric & Public Affairs.