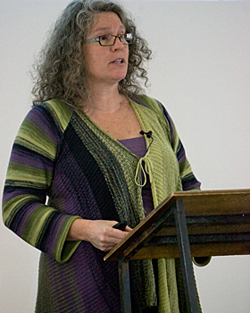 On March 11, 2011, Professor Catherine Palczewski, delivered the Rhetorical Leadership lecture “Taming Women’s Embodied Argument: The Transgressive Potential of Suffrage Advocates’ Body Argument and Social Responses of Recuperation.” She argued that, although the rhetorical enactment of political leadership by suffrage advocates’ body argument played a powerful role in winning the vote and reconfiguring meanings of citizenship, it did not proceed unanswered. The answers came not only through overt responses on the part of opposing rhetors, but also through dispersed reactions in the popular culture. Much as the infamous “Don’t tase me, bro” video domesticated police brutality by making it appear funny or merely a prank, Dr. Palczewski analyzed how postcard images of police reactions to woman suffrage protestors made police brutality against them funny and contained the oppositional potential presented by their protesting, hunger striking, and suffering bodies. Her insights are relevant to contemporary political protests based on the “massing of bodies ” and she challenges the notion that humor tends to be politically benign or progressive.

Dr. Palczewski is Professor of Communication and Affiliate of Women’s and Gender Studies at the University of Northern Iowa. She is also the 2010 NCA Women’s Caucus Francine Merritt Award winner and publishes in journals including Quarterly Journal of Speech, Argumentation & Advocacy, and Women & Language.