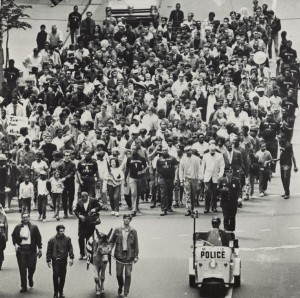 Marches are a form of public demonstration that activists commonly use to express displeasure with or support of certain conditions or practices. One of the most well known marches from the Civil Rights Movement was the March on Washington for Jobs and Freedom, held in the nation’s capital on August 28, 1963. Hundreds of thousands of people gathered at the Washington Monument and marched to the Lincoln Memorial to listen to a variety of speakers, including Martin Luther King, Jr. who delivered his historic “I Have a Dream” speech. Local civil rights organizations in Milwaukee also used marches along with other forms of protest to call attention to local patterns of racial segregation and prejudice. The most notable marches in Milwaukee were the open housing marches (also known as fair housing marches) of 1967-1968. These marches were sponsored and organized by the Milwaukee NAACP Youth Council and Alderwoman Vel Phillips. The NAACP Youth Council, its Commando unit, along with other supporters, marched 200 consecutive days in support of the passing of an open housing bill. Other local civil rights organizations that coordinated marches as a means of public protest included the Congress of Racial Equality (CORE) and the Milwaukee United School Integration Committee (MUSIC). EM