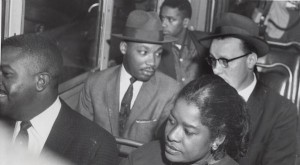 Dr. Martin Luther King, Jr. is undoubtedly the most recognized activist of the Civil Rights Movement. He is particularly remembered for his dedication to a Gandhian nonviolent philosophy. King was born on January 15, 1929 in Atlanta, Georgia. After finishing his doctorate at Boston University, he returned to the South to begin working as a Baptist preacher. He subsequently became active in the movement for civil rights that was emerging in the South. King helped to organize the Montgomery Bus Boycott of 1955, in which Black residents of Montgomery, Alabama stopped riding the city busses for 382 days. A few years later, in 1957, he co-founded the Southern Christian Leadership Conference (SCLC), a direct action, nonviolent, church-based organization that was dedicated to attacking segregation and supporting Black voter registration in the South. In 1963, King helped organize the March on Washington which was the largest civil rights demonstration in history with nearly 250,000 people in attendance. At the march, King delivered his famous “I Have a Dream” speech from the steps of the Lincoln Memorial. The following year he was awarded the 1964 Nobel Peace Prize for his leadership in the American Civil Rights Movement. Over the course of his years as an activist, King led numerous marches throughout the South, participated in lunch counter sit-ins, and launched major anti-segregation and voter registration campaigns in such states as Alabama, Georgia, and Tennessee.

Towards the late 1960s, King broadened his agenda and began focusing on the Vietnam War, as well as the poverty that existed in the urban North and rural communities throughout the country. In July 1966, King moved his campaign north to Chicago where he attempted to attack public school and housing segregation. While there, he led open housing marches through the all-white suburb of Cicero where residents attacked and hysterically yelled venomous racial obscenities at marchers. During the march, King was struck in the head with a rock and barely missed a knife thrown in his direction. The following year, the Milwaukee NAACP (National Association for the Advancement of Colored People) Youth Council sponsored similar open housing marches on the predominantly white South Side of Milwaukee. On September 4, 1967, King acknowledged the efforts of the Milwaukee’s civil rights activists and sent a telegram to Father James Groppi at St. Boniface church in which he wrote “What you and your courageous associates are doing in Milwaukee will certainly serve as a kind of massive nonviolence that we need in this turbulent period.” King visited Milwaukee in 1965 and lectured to a sold-out audience in the University of Wisconsin-Milwaukee union ballroom on the necessity of fair employment legislation.

King was assassinated on April 4, 1968, in Memphis, Tennessee, at the age of 39. While violent riots erupted in other cities across the country, the Milwaukee NAACP Youth Council and its Commando unit persuaded Milwaukeeans to honor Dr. King’s nonviolent legacy by demonstrating peacefully. On Monday, April 8, 1968, fifteen thousand people of all races gathered in unity and marched through Milwaukee’s inner core and downtown area. The march was preceded by a memorial service for King held at St. Boniface church. The march was the largest civil rights demonstration in Milwaukee’s history. For the most part, it was a silent march, except for the occasional singing of the civil rights anthem “We Shall Overcome.” In 1985, the Milwaukee Common Council approved renaming part of North Third Street as “Martin Luther King Drive.” The following year marked the first year in which the third Monday in January was celebrated as a national holiday known as Martin Luther King Jr. Day. EM