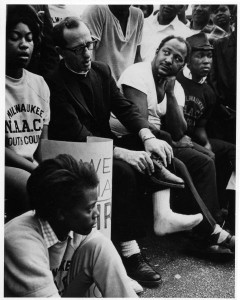 The Milwaukee NAACP Youth Council was founded in 1947 by Ardie Clark Halyard. Throughout the late 1940s and into the 1950s, the Youth Council was rather conservative in nature. The turning point came in 1963 when a young Black teen came to the Youth Council lamenting a local restaurant‘s discriminatory hiring policy toward people of color. For the most part, the Youth Council consisted of poor and working-class Black youth, but there were also a number of white members. Between the years of 1966 and 1968, the Youth Council gained national attention for its confrontational direct action campaigns. The group received many awards for its work and steadfast dedication to seeking equality for African Americans in Milwaukee. The Youth Council was presented with the Youth Council of the Year Award at the annual convention of the national NAACP in 1967 and again in 1968. Father Groppi was also named Advisor of the Year both years as well. EM.