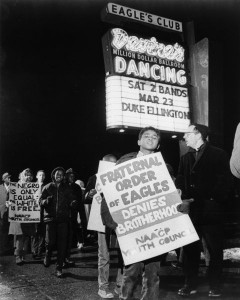 Early in 1966, the Milwaukee NAACP Youth Council, along with its advisor Father James Groppi, picketed the Fraternal Order of Eagles Club, a nationwide, exclusively-white social club in Milwaukee. A large number of Eagles Club members consisted of prominent city officials, particularly judges. The Youth Council regarded the restrictive membership policy against people of color as racist, but the fact that so many judges belonged to the club was even more upsetting. They could not fathom how judges could belong to a segregated club and still fairly judge cases involving people of color. The Youth Council demanded that those judges who were members of the club either resign from their posts or resign from the club. For several weeks between the months of February and April of 1966, Youth Council members did nightly picketing outside the Eagles Club Ballroom located on Wisconsin Avenue. Despite their persistent efforts, the Youth Council garnered very little attention from local news programs or daily press.

In August of 1966, the Youth Council re-strategized and decided to target individual judges, particularly those who tended to be more liberal. This time instead of picketing outside of the Eagles Club they brought their protest to the homes of targeted judges. The first judge picketed was Circuit Judge Robert C. Cannon. The Youth Council, which consisted of mostly poor and working-class African American youth, gained an enormous amount of attention when they brought their protest to Cannon’s upper-middle class suburban neighborhood. The Youth Council protested daily, and by the twelfth night of protesting, the scene had become a full spectacle with thousands of hostile white counterdemonstrators shouting obscenities and pelting hard objects at Youth Council members. The scene became so tense that the mayor eventually called in the National Guard. After picketing Cannon’s home, the Youth Council also briefly picketed the East Side home of County Judge Christ T. Seraphim and the South Side home of Congressman Clement J. Zablocki. Despite attempts to negotiate a peace, the national president of the Eagles Club organization refused to meet with NAACP officials. In June of 1988, Thomas Davis, a Black man, was sworn in as president of the Eagles Club. Months later, in August, the club filed for bankruptcy, citing $600,000 in debts. That same month, the club’s facility located on Wisconsin Avenue closed. Afterwards, Davis formed the new Greater Milwaukee Eagles Club. EM