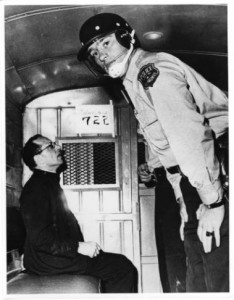 In 1963, Catholic priest James E. Groppi, who grew up in Milwaukee’s Bay View neighborhood, was transferred to St. Boniface Parish, a predominantly working-class Black parish located on Milwaukee’s North Side. While working at St. Boniface, Groppi became deeply involved in the Civil Rights Movement that was sweeping the nation. In 1965, after returning from the March on Selma, Alabama, he became a member of Lloyd Barbee‘s organization, the Milwaukee United School Integration Committee (MUSIC), eventually rising to the position of second vice-chairman. In 1965, Groppi became the adviser to the Milwaukee NAACP (National Association for the Advancement of Colored People) Youth Council. The Youth Council’s first campaign with Groppi as its adviser targeted the local Order of Eagles Club in 1966. The following year, Groppi and the Youth Council joined forces with Alderwoman Vel Phillips to rally for a strong open housing law in Milwaukee. His final campaign with the Youth Council was the 1968 fight against employment discrimination at the Allen-Bradley Company.

It was while working at a predominantly Black youth center on Milwaukee’s North Side that Father Groppi was able to witness firsthand the poverty and racism that plagued Milwaukee’s Black community. Soon after, he began traveling to the South to participate in voter registration drives and civil rights marches. Upon returning to Milwaukee, he joined local civil rights organizations. Between the years of 1965 and 1968, Father Groppi and the Milwaukee NAACP Youth Council initiated several major civil rights campaigns in the city of Milwaukee, garnering much publicity and controversy. After resigning from the Youth Council in the fall of 1968, Father Groppi continued his activism. In 1969, he organized the Welfare Mother’s March to Madison, Wisconsin to protest cuts in the state’s welfare budget. In 1972, he was arrested while participating in a blue collar workers protest and an anti-Vietnam War protest. He later enrolled in the Antioch School of Law in Washington, D.C, but withdrew from the school after two years. Towards the end of Groppi’s life he lived quite modestly. He eventually left the priesthood, married former Youth Council member Margaret Rozga in 1976, and together they had three children. He died in 1985 at the age of fifty-four. A few years later, in 1988, Milwaukee Mayor John Norquist and the Milwaukee Common Council renamed the city’s 16th Street bridge as the James E. Groppi Unity Bridge. EM