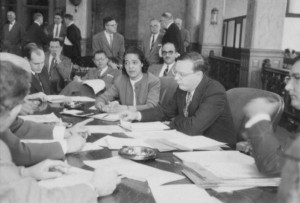 The Common Council is the legislative branch for the city government of Milwaukee, and the elected officials who serve on it are called aldermen and alderwomen. During the 1960s, the Milwaukee Common Council came under fire from civil rights activists for its failure to adopt an effective open housing ordinance that would prohibit racial discrimination among landlords and real estate agents.

By 1967, fair housing had become a national issue and activists across the country marched to protest housing discrimination. That summer, the Milwaukee National Association for the Advancement of Colored People (NAACP) Youth Council picketed the homes of Aldermen Martin Schreiber, James Maslowski, Robert J. Dwyer, and Eugene Woehrer after the Common Council repeatedly voted down Alderwoman Vel Phillips‘s proposals for an open housing ordinance for Milwaukee. The Youth Council then marched for 200 consecutive nights demanding passage of an open housing law. Six days after the Youth Council ended their marches, Martin Luther King, Jr., was assassinated. A week later, the U. S. Congress passed a national fair housing law. With the passage of a national law and the election of seven new Common Council members, Milwaukee finally passed an open housing ordinance on April 30, 1968.

On April 30, 2008, members of the Milwaukee Common Council commemorated the 40th anniversary of the passage of Phillips’s open housing law. Vel Phillips and Margaret Rozga were two of the activists in attendance. LW