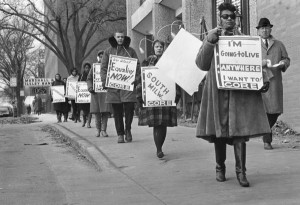 Alderwoman Vel Phillips introduced her first fair housing bill to the Milwaukee Common Council in 1962. It took Phillips and her husband Dale Phillips approximately seven months to research and write up the housing discrimination ordinance. The ordinance proposed that the Milwaukee Community Relations Commission (a body of citizen members) be given unprecedented, broad investigative powers in alleged housing discrimination cases. If a particular case was unable to be settled, the city attorney would be asked to initiate court action. Phillips’ ordinance also proposed a $250 fine or a 30-day jail term on conviction. The ordinance applied to anyone renting, leasing, or selling a unit of housing, property, or lot available for constructing a house. The Milwaukee Common Council rejected Phillips’ first bill and would continue to reject her fair housing bill on three more occasions. In 1967, Phillips partnered with the Milwaukee NAACP (National Association for the Advancement of Colored People) Youth Council to rally for the passage of a strong city-wide open housing bill. The open housing campaign gained national attention and put the spotlight on the housing issue in Milwaukee. EM