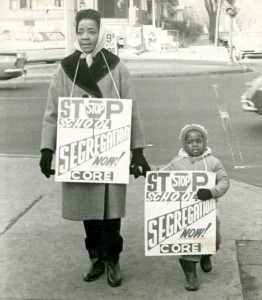 MUSIC’s primary goal was to eliminate segregation in Milwaukee’s public schools. MUSIC attempted to accomplish this goal by conducting a series of high-profile demonstrations designed to bring the issue of de facto segregation to the public’s attention, and pressure the Milwaukee school board to alter their policies. MUSIC focused on the intact bussing of students, and the construction of schools in locations that would result in racial segregation. MUSIC’s protest tactics ranged from sit-ins and sing-ins to physically blocking school buses and construction equipment with their own bodies. Additionally, MUSIC organized massive public school boycotts and established Freedom Schools in their place.

After a year of demonstrations by MUSIC failed to enact change in the school board’s policies, Barbee filed a federal lawsuit, Amos et al. v. Board of School Directors of the City of Milwaukee, charging the school board with maintaining racial segregation in its schools. As Barbee and Morheuser began to prepare for the court case, militant direct action by MUSIC began to taper off. In December 1965, the group conducted their last major demonstration when they protested the construction of MacDowell Elementary School. LW