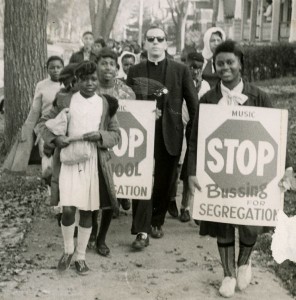 Segregation refers to the social and geographical separation or isolation of people based on perceived group affiliations, which can include race, ethnic origin, religion, and class. Beginning in 1877, states began to create laws that forced African Americans to use separate public facilities and accommodations from white people. These laws, commonly referred to as “Jim Crow” laws, covered all aspects of life and were prevalent in the South and border states until the mid-1960s. The purpose of the laws was to convey and maintain a sense of inferiority among non-whites, and a sense of superiority among whites. This type of segregation is called “de jure” segregation, or segregation by law.

Another type of segregation was mainly prevalent in the urban North. Largely as a result of discriminatory housing practices among Northern landlords and real estate agents, many neighborhoods in the North were racially segregated. During the 1960s, Milwaukee was one of the most racially segregated cities in the nation. Many Northern school boards also adopted “neighborhood school” policies during this period. Because neighborhood schools assigned students to the schools closest to their homes, the schools reflected the racial or ethnic make-up of the neighborhoods. Additionally, Northern school boards typically enacted other measures that served to strengthen the segregation in their school systems rather than weaken it. In Milwaukee, these included the practice of intact bussing and the selection of school district boundaries in locations that would result in racially segregated districts. Racial segregation caused by discriminatory practices, instead of by law, is called “de facto” segregation. LW