Beginning in the late 1950s and continuing until 1971, the Milwaukee School Board utilized a practice known as “intact bussing” to deal with overcrowding in Milwaukee’s inner-city public schools. The policy called for taking entire classes of 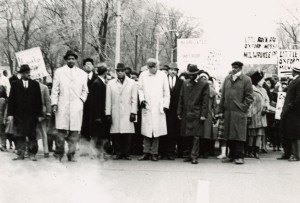 students and their teachers from an overcrowded school, and transporting them to a school that had room to accommodate them. Every school day, students and teachers would report to their regular schools in the morning, and then board busses which would take them to the receiving schools where they would remain together as a class instead of being incorporated into the receiving school’s classes.

Both Black and white students were bussed intact, although the overwhelming majority was Black. In some instances the children would eat lunch at their receiving school, in others they would not. Often, students would board busses again at lunchtime to be taken back to their regular schools for lunch. After lunch, they would be bussed back to their receiving school to attend the rest of their afternoon classes. When classes finished for the day, the students would again board busses to be taken back to their regular schools to be dismissed for the day.

In the mid-1960s, the Milwaukee United School Integration Committee (MUSIC) began protesting against the policy of intact bussing on the grounds that it was racist and was fostering segregation. Protestors donned signs that read “Stop Bussing for Segregation” and stood in front of busses, physically blocking their departure. Additionally, MUSIC members and volunteers conducted research on the topic and compiled an enormous amount of data illustrating the true nature of the intact bussing policy. In the Milwaukee desegregation lawsuit filed in 1965, attorney Lloyd Barbee utilized this data in proving that the Milwaukee School Board was intentionally maintaining segregation in its schools. LW