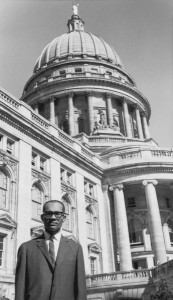 Lloyd Augustus Barbee was an attorney, a state legislator, and one of the most prominent leaders of Wisconsin’s civil rights movement. He was born in Memphis, Tennessee, on August 17, 1925, and he joined the National Association for the Advancement of Colored People (NAACP) when he was just 12 years old. Barbee served in the navy during WWII. In 1949 he graduated from the all-Black LeMoyne College with a B.A. in economics. Later that year, Barbee moved to Madison to attend the University of Wisconsin Law School, but dropped out after his first year because of the racism he encountered among his peers and professors. He eventually returned to the university, however, and received his law degree in 1956.

Barbee quickly earned a reputation as a man dedicated to human rights. He was elected president of the Madison branch of the NAACP in 1955. In 1958, he completed a study outlining discriminatory housing practices in Madison, and conducted his first civil rights demonstration in support of open housing in 1961 at the Wisconsin State Capitol. That same year, Barbee was elected president of the Wisconsin NAACP. At the urging of national NAACP leaders, Barbee moved to Milwaukee in 1962 to confront the de facto segregation of the city’s public schools.

In 1964 Barbee organized and led an alliance of civil rights activists dedicated to ending de facto segregation in Milwaukee called the Milwaukee United School Integration Committee (MUSIC). After a year of high-profile MUSIC demonstrations with no positive changes in school board policy, Barbee decided that the only way to enact change would be through the legal system. On June 17, 1965, Barbee filed a federal lawsuit, Amos et al. v. Board of School Directors of the City of Milwaukee, charging the Milwaukee School Board with unconstitutionally maintaining racial segregation in its schools. Barbee won the case in 1976, but spent the next several years dealing with appeals, new trials, and work to enact a viable plan to desegregate the school system.

In 1964 Barbee was also elected to the Wisconsin State Assembly where he served until 1977. He soon became known among his fellow assemblymen as “the outrageous Mr. Barbee” because of the progressive legislation he advocated. In addition to legislation concerning open housing and fair employment practices, Barbee introduced legislation promoting gay rights, women’s rights, prison reform, the legalization of drugs and prostitution, the disarming of police officers, and the taxation of churches. In later years, Barbee continued to work as a Milwaukee lawyer, and remained dedicated in his commitment to promoting human rights and positive social change. He died on December 29, 2002, at the age of 77. LW

See also: citations for Lloyd Barbee in the bibliography