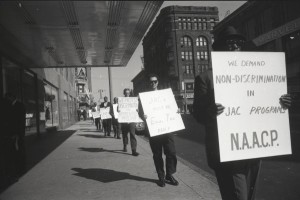 The National Association for the Advancement of Colored People was founded in 1909. A decade later, in 1919, the Milwaukee Chapter of the NAACP was officially organized. By the end of that year, local membership had increased substantially. Throughout the twentieth century, many prominent members of the Black community, such as attorneys Dale and Vel Phillips, held membership within the branch. During the early 1940s, the chapter was inactive but was eventually revived in 1947. That same year, NAACP member Ardie Clark Halyard went to work developing and organizing a Youth Council for the branch.

During the 1960s, the branch’s Youth Council came to the forefront of Milwaukee’s civil rights struggles. Elders of the local branch, however, did not always agree with the youth chapter’s methods, particularly the confrontational direct action campaigns that the Youth Council and its advisor, Father James Groppi, initiated. EM