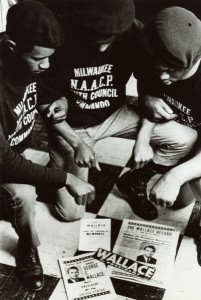 After encountering hostile and violent counterdemonstrators during the Eagles Club protests, the NAACP Youth Council realized that police protection was insufficient. In October of 1966, the Youth Council unveiled its exclusively-male security unit known as the Commandos. The Commandos went into dangerous situations to protect marchers as well as Father James Groppi. The unit had a very militant image. They were usually clad in attire that included a black beret, black boots, and a sweatshirt displaying the word “Commando” on the front or back. The Commandos were nonviolent but they maintained that they would use force if necessary in order to defend themselves and marchers if necessary.

Commandos usually ranged in age from 18 to 30. Initially, the Commando unit consisted of members of the Youth Council’s direct action committee. Leaders within the unit included Dwight Benning, Duane Toliver, Nathaniel Harwell, and Prentice McKinney. Eventually, many Commandos parted ways with the Youth Council to create a separate organization that had a social service approach to civil rights activism. The group, which became known as the Commandos Project I, was one of the most effective social service agencies in the city of Milwaukee from the late 1960s until the early 1980s. EM