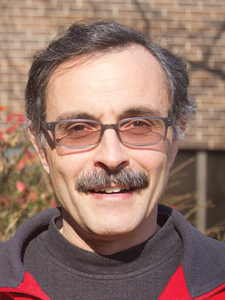 Professor of Chemistry and Biochemistry

My research group studies the reaction mechanisms of metalloenzymes using a variety of methodologies.  Currently, our two major projects are studies of ammonia-nitrite interconversion catalyzed by the bacterial enzymes, cytochrome c nitrite reductase (ccNiR) and hydroxylamine dehydrogenase (HDH), and nitric oxide neutralization catalyzed by the Mycobacterium tuberculosis protein truncated hemoglobin N (trHbN).  Ammonia and nitrite are examples of so-called “reactive nitrogen”, which is nitrogen metabolically available to most living organisms, as opposed to atmospheric N2 which is directly usable by only a small number of bacteria.  Extensive use of fertilizer over the past century has upset the global balance between reactive and atmospheric nitrogen, and this in turn has had severe ecological consequences such as aquifer eutrophication and drinking water contamination.  A detailed understanding of the ammonia-nitrite interconversion process may lead to the more efficient use of ammonia fertilizer in agriculture which would help redress the balance between reactive and atmospheric nitrogen.  It may also offer insights about nitrite metabolism by gut bacteria, which in turn may be relevant to understanding the suspected carcinogenicity of cured meats.   Our interest in trHbN is more specific than our interest in ammonia-nitrite interconversion.  TrHbN neutralizes nitric oxide produced by the immune system to kill bacteria, thus helping M. tuberculosis to evade the body’s defenses.  Our studies have identified several ways in which trHbN activity can be inhibited, and we hope to exploit these by designing inhibitors that are therapeutically effective against tuberculosis disease.