February 16, 2022 Kandula
Celebrate St. Patrick’s Day all March long at the Irish Cultural and Heritage Center, 2133 W. Wisconsin Ave., Milwaukee with four of Irish music’s most sought after bands; The High Kings on Wednesday, March 9 at 7 p.m., Socks in the Frying Pan on Thursday, March 10 at 7:30 p.m. (More information), Cherish the Ladies on Sunday, March 13 at 2 p.m. and RUNA on Saturday, March 26th at 7:30 p.m. The Byrne Brothers will be performing at the ICHC on Saturday, April 16.
CHERISH THE LADIES
“It is simply impossible to imagine an audience that wouldn’t enjoy what they do,” according to the Boston Globe writing about one of the most engaging and 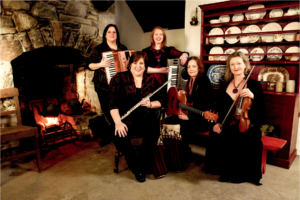 successful ensembles in the history of Celtic Music. The Grammy Award nominated Irish-American group was formed in 1985 to celebrate the rise of women in what had been a male-dominated music scene. Cherish is fronted by Joanie Madden recognized by the National Endowment for the Arts who presented her with a 2021 National Heritage Fellowship, the nation’s highest honor for folk and traditional artists. The outstanding ensemble joining her includes Mary Coogan (guitar), Mirella Murray (accordion), Nollaig Casey (fiddle), Gabriel Donohue (piano, vocals), Kate Purcell (vocals and guitar) along with Champion Irish dancers.
RUNA
The band enchants by pushing the boundaries of Irish folk music into Americana and 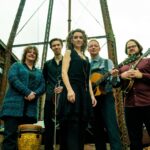 roots music and finding the universal thread that binds past to present. Interweaving music from Ireland and Scotland with jazz, bluegrass, flamingo and blues, they offer a thrilling and redefining take on traditional music. Their sound stems from the musical and geographical diversity and personal achievements of its members: vocalist and step dancer Shannon Lambert-Ryan from Philadelphia, Dublin-born guitarist Fionán de Barra, Cheryl Prashker from Montreal on percussion, Nashville based Caleb Edwards on mandolin and vocals and All-Ireland Champion, bodhrán player and step dancer Jake James from New York City.
THE BYRNE BROTHERS 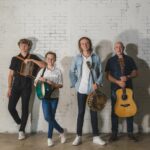 Recognized as one of the biggest names in Irish music and voted “Rising Stars of the Year in 2020 by American Radio Listeners, dad Tommy and his three sons are
“Living the Dream” they only wished for a few years ago. Living their dream is how they describe their move from Donegal, Ireland to Florida in 2018 after receiving permanent residency in the United States for their “Extraordinary ability in the arts.” According to Irish American Magazine, “The Byrne Brothers are taking traditional Irish music and dance to a whole new level.”

For tickets and for more information, visit: www.ichc.net.