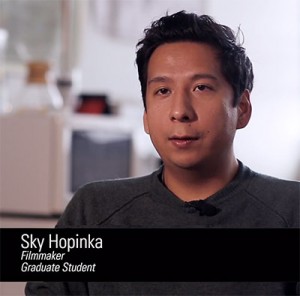 Sky Hopinka, filmmaker and graduate student in UW-Milwaukee’s Peck School of the Arts, created a seven-minute film that has won a number of awards and was screened at Sundance 2016. The film explores the bond between Sky and his father, a powwow singer. Hopinka plans to expand the film into a broader documentary exploring contemporary Ho-Chunk life. Read the article and watch an excerpt of the film. Read more about Sky at https://uwm.edu/news/pow-wows-to-film-fests-chronicle-of-culture-finds-audience/.