“It is an honor to serve as UWM’s IT leader, working in collaboration with the campus’ superb technologists as we support our university’s missions of teaching, research, and community engagement.” 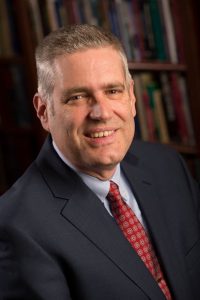 In January of 2014, Robert J. Beck, Ph.D. assumed his current role as UWM’s Associate Vice Chancellor and Chief Information Officer (CIO). He previously served as the College of Letters and Science’s CIO (2003-14) and as Director of Academic Technology for UWM’s Center for International Education (2000-11). Prior to his arrival at the University of Wisconsin – Milwaukee in 2000, Dr. Beck directed Tufts University’s Center for Teaching Excellence (1998-2000) and taught for eight years in the University of Virginia’s Department of Government & Foreign Affairs.

Beck serves on the UW System’s CIO Council and also on the Common Systems Review Group (CSRG), appointed by the UW System’s Vice Presidents for Administration and Academic & Student Services. He also currently serves on the Functional Leadership Team charged with overseeing UWM’s Integrated Support Services (ISS) Project. In addition, Beck is UWM’s Executive Sponsor of the Business Intelligence (BI) Project. He is also a proud 2012 alumnus of the MOR Associates’ IT Leaders Program.

In 2012, Dr. Beck received the UWM Faculty Distinguished Undergraduate Teaching Award. As a tenured faculty member in UWM’s Department of Political Science, he has regularly offered a “blended” format course in international law. Marcus Ethridge, former Political Science Department Chair, notes that Beck not only uses technology well in the classroom – he also writes, researches and teaches about it. “No instructor in my acquaintance has devoted as much time and energy to the teaching enterprise as Bob has.” Former student Bianca Pearson, who graduated as a special agent from the FBI Academy in January of 2013, observes: “To this day, Dr. Beck’s International Law and Conflict Management is still one of the most challenging and academically meaningful courses I have taken.”