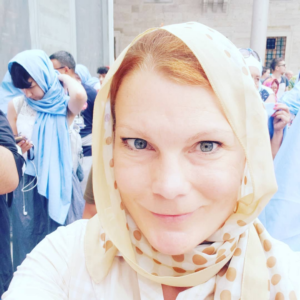 Recently, a friend and I were having a conversation about career paths: where we’d been, how we had gotten there, where we might want to go from here, and how our decision-making has changed over time. I was lamenting the fact that my life had followed a non-traditional path, and that perhaps to an outsider my choices might not make sense, maybe I’d tried too many things, that I’d taken the backroads to my career destinations, often stopping in the unexpected places.

“This role,” I told her, “I will remain in for at least five years.” I have recently accepted the role of Global Security Program Manager at Stanford with a start date of September 12, 2021. In this role, I will help further develop and support global crisis planning and emergency response and training across campus stakeholders while also supporting global risk assessment and mitigation more broadly Stanford’s many international activities.

“That’s great,” she said to me with a smile, “but one thing I know for sure. Whatever you decide, you are a person who will always have options.”

I believe that this path – this path full of options – began for me with the International Studies Major at UW Milwaukee. I pursued the International Politics and Foreign Relations option while also completing a major in German. As a high school student, I’d studied in Australia and in college, I spent my junior year abroad in Freiburg, Germany, and while I wasn’t sure where my life would take me, I knew for certain I wanted to keep exploring. And that’s what I’ve done.

I received a Foreign Language Area Studies fellowship to study Arabic and continued at UW Milwaukee to complete a Master of Arts in Political Science while also learning Arabic and studying in Tunisia and Jordan. After some time spent in the field of international education (including at UW Milwaukee where I helped manage the UN Summer Seminar, one year), these choices led me to a career in the federal government. I served in roles not limited to but including leadership analyst at the Central Intelligence Agency and senior analyst and team lead for the Department of Homeland Security Threat Task Force, a group which monitored terrorist threats to the United States and to Europe. I also spent some time as a federal government contractor in Afghanistan on Bagram Air Force Base working side by side with NATO forces.

However, I’ve always been called to education, particularly international education, and so I sought to return. In January 2020, I found myself in the position of Director of Student Health and Safety with the Institute for Study Abroad (IFSA), arriving there in as bushfires in Australia and on the heels of political unrest in Chile, only to be faced with one of the largest challenges to the field of international education in a long time (maybe ever?), the global Covid-19 pandemic. As we cancelled programs globally and supported the safe return of over 2000 students from over 15 countries, no one knew what the future would hold.

My coworkers and I converged around a new global reality, learning as much as we could about Global Public Health, a field that will clearly be and clearly has been critical to the future, and working towards new protocols and tools to support continued international education and ultimately international travel for students everywhere. And we’ve landed in a world where a global skillset and understanding is even more important than ever given the global nature of the challenges we face. I ultimately made a difficult decision to leave IFSA for Stanford, however, I’m grateful for the twists and turns and opportunities that ultimately led me to this field of global risk management in higher education and to the adventures yet to come in the future. And I would never have been able to pursue this path without that first step in International Studies at UW Milwaukee. I met people there that I continue to correspond with, who mentor me and support me and from whom I continue to gain inspiration – and from whom I hope I always will. My perspective is global, but Milwaukee is always where I come home.