The National Student Survey of Engagement (NSSE) collects information about students’ perceptions, activities, and experiences. NSSE focuses on student engagement in activities that are considered effective educational practices (such as collaborative learning and faculty interaction with students) found to be associated with better student outcomes. In this sixth round of the NSSE at UWM, 769 first-year students and 1,142 senior students completed the survey. Previous surveys occurred in 2008, 2006, 2004, 2002 and 2001. The next administration of NSSE is planned for 2014.

Findings from NSSE can be used by participating institutions to compare their performance with other schools. In 2011, 751 institutions participated in the NSSE, with responses from over 537,000 students from across the U.S. and Canada. In 2011, the two peer comparison groups to which UWM finding are compared include the self-selected and identified “Urban Universities” consortium and those institutions considered, like UWM, to be part of the Carnegie Classification of “Research Universities with high research activity”.

The Summary Reports provide an overview of the major findings from the survey. Data is presented for first-year and senior respondents separately and by peer group. The Executive Snapshots are concise overviews that provide selected findings and peer comparisons. The Detailed Data section provides frequency distributions, means, and detailed statistics for each of the questions contained on the NSSE. 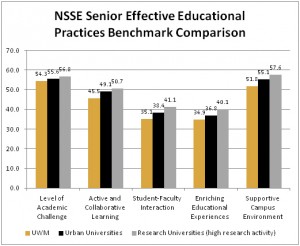 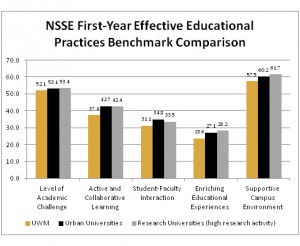 NSSE has developed five indicators of effective educational practice which institutions can use to assess their performance and compare themselves with peer institutions. Using groups of similar questions from the survey, NSSE creates benchmark scores for the five indicators: a score off zero would mean that every student chose the lowest response option for every question, and 100 would mean every student chose the highest response to every item. Although benchmarks are reported on a 0-100 scale, they are not percentages. See below for more information regarding the definition and rationale of each indicator.