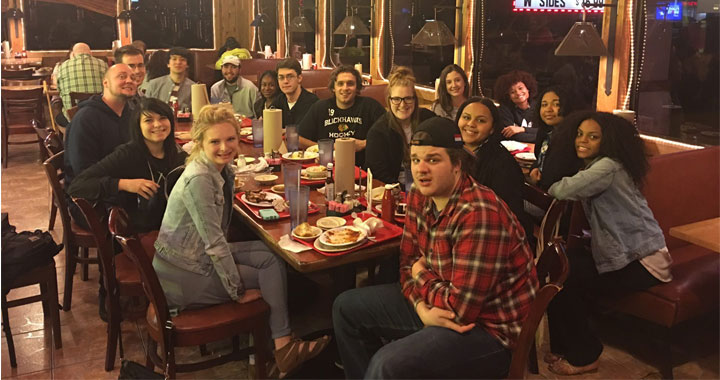 Students gather together for dinner at a restaurant in Port Arthur, Texas, after a long day of gathering interviews. As part of the JAMS immersion experience, they traveled to Texas to report on the aftermath of Hurricane Harvey in 2017. Photo courtesy of Media Milwaukee.

When she arrived in Port Arthur, Texas, in the aftermath of Hurricane Harvey in 2017, Talis Shelbourne expected to see people cleaning up the damage wrought by the storm. What she found was a neighborhood struggling to breathe in the shadow of one of the nation’s largest oil refineries.

“I was coughing and my eyes were stinging. It’s sickening, the air and how polluted it is,” she said. “All of these people have respiratory problems. We went there thinking, oh, hurricane victims, we’ll find them cleaning up. Instead, we found out that they’d been suffering for a long time and hadn’t really had a voice.”

She and 18 of her fellow students spread across the town over the next two days,
asking questions, conducting interviews, and writing stories. At the end, Shelbourne composed an overview – a summary of all the stories the students crafted during what has become a popular journalism immersion experience.

Revealing those untold stories is exactly the point of the immersion trips, according to Jessica McBride, a senior lecturer in UWM’s Journalism, Advertising, and Media Studies (JAMS) Department. Once a semester, she and other department staff accompany students on a two- to three-day journey to a new locale to uncover the personal stories of national events.

Between gas money, airfare, train tickets, and hotels, the trips can get expensive, though McBride is good at sticking to a strict budget. That’s why she’s excited that she and fellow JAMS instructor Jessie Garcia Marble recently received a $15,000 grant from the Greater Milwaukee Foundation Journal Foundation Walter Jay and Clara Charlotte Damm Fund meant to support the trips. This is the second and largest grant the program has been awarded; the group was awarded a $6,000 grant from the Journal Foundation in 2017.

“We appreciate the grant money because it will give our students opportunities, open doors for them to do some pretty amazing journalism on some of the biggest national stories,” McBride said.

The immersion trips grew out of the 2016 presidential election. McBride and Jessie Garcia Marble, noticed that western Wisconsin held a large number of counties that flipped from blue to red, reflecting the state’s voting as a whole – a stunning upset in a state that had twice voted for Barack Obama.

“We wanted to embrace the fact that Wisconsin was part of this massive, surprising national story,” McBride said. “We set out just to ask voters, unfiltered, without spin, why did they do what they did. We took about 15 students and four cars and drove to Crawford County, Wisconsin.”

They also hit up voters in Iowa and Minnesota on the three-day journey.

McBride and Marble ran with it. Drawing students from McBride’s news reporting class and Marble’s television reporting class, the pair set their sights on Flint, Michigan, to cover the ongoing water crisis. Then came the Hurricane Harvey trip to Texas. When young people from Parkland, Florida, descended on Washington D.C., for the March for Our Lives event, JAMS students, with help from JAMS senior lecturer Jane Hampden-Daley, hopped an Amtrak train to cover the rally and a nearby gun show. Most recently, they finished up a trip to Barron, Wisconsin, a rural town that has become a new home for many Somali immigrants.

The articles produced from the trips have garnered awards from the Milwaukee Press Club, the Society of Professional Journalists, the Wisconsin Broadcasters Association, the Midwest Broadcast Journalists Association and more.

Students are expected to have a solid grasp of news reporting before they embark on an immersion trip, but each excursion is a chance to hone their interviewing skills – sometimes by literally walking into a restaurant and asking to speak with patrons on their barstools.

At the end of the trip, each journalist writes or produces at least one story. The articles and videos are collected with the help of JAMS Digital Media Specialist Jeff Loomis to be published on a dedicated website.

The technical skills students pick up along the way are invaluable when it comes time to find internships and jobs.

“The work I produced through our trip to Houston landed me a job as a reporter right out of school! The real-world experience was impressive to my employer,” JAMS alumna Amanda Becker wrote. Shelbourne adds that the experience she gained on the immersion trips helped her secure her current internship at the Milwaukee Journal Sentinel.

And, said Ed Makowski, who traveled to Flint, the immersion trips help students understand the value of boots-on-the-ground reporting.

“I think it’s a really great exercise in experiencing another culture,” he said. “It really impacts the work you do. If you don’t show up and have those experiences, your work is going to be, comparatively, pretty dull.”

Beyond that, however, students are broadening their horizons. McBride recounts how, prior to their excursion to rural Wisconsin in 2016, some of the group had never spoken to a farmer in their lives. Others hailing from rural Wisconsin had to learn to navigate Flint’s urban blight – McBride recalls streets literally lined with foreclosed houses.

An eye to the future

Next year marks some big changes for the immersion trips. Garcia Marble is leaving UWM to take a position as the Broadcast Director at WTMJ-TV. Her shoes will be tough to fill, McBride says. But, she adds, there are positive changes too: the immersion trip is now a dedicated class, which should allow more students the opportunity to participate.

And in the meantime, McBride’s already thinking about where they should go next. She’s contemplating Tijuana, Mexico, to cover the migrant caravans seeking entry to the United States, but there are plenty of possibilities.

“I think, in an era of declining news resources, UWM students are playing a role in civic life by covering some of the stories that the media can’t get to,” McBride said. “Now, with more grant money, we can maybe do more.”