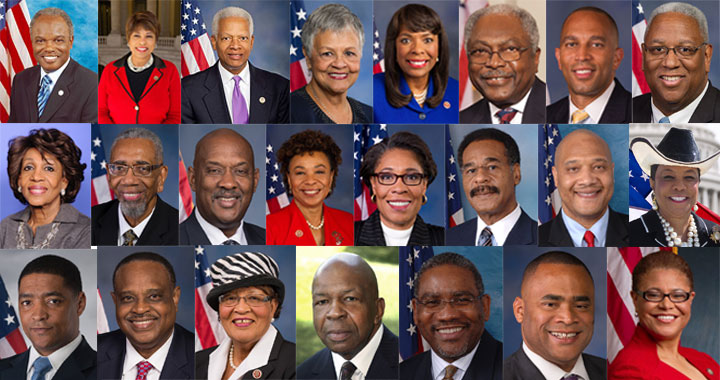 The current African American representatives from the 115th Congress usually vote in ways that benefit black Americans, according to a new paper by Africology professor Nolan Kopkin. Photos courtesy of the U.S. government.

That’s a problem, according to a new paper by UWM Africology professor Nolan Kopkin, because “What comes out of this research is that if we’re able to increase black representation in Congress, then we can probably provide black Americans with more economic and political outcomes that are more similar to those of whites,” he explained.

Kopkin’s paper, “Substantive Black Political Representation: Evidence from Matching Estimates in the United States House of Representatives,” was published in the Review of Black Political Economy in December. In it, he compares the voting records of black representatives to their white peers to determine how much their race affects the way they vote on bills.

That’s substantive representation – “the tendency of the elected official to advocate on behalf of certain groups based on his or her own identity,” Kopkin explained. A black congressman might be more likely to vote with the black caucus on civil rights bills, for example, or a congresswoman might be more likely to take the “female position” on a bill regarding gender equality.

Race, representation, and the results

It turned out that race does play a role, usually in ways that would benefit black Americans.

“We do see that black representatives tend to vote much more in favor of policies that are more in line with what African Americans want, even among people of the same political parties,” Kopkin said.

To determine how much a representative’s race factors in their voting, Kopkin looked at black representatives’ votes from the 1980s to today. Since African American representatives overwhelmingly identify as Democrats, he matched each with a white Democrat who presided over a demographically similar congressional district so that he could control for factors like constituents’ ages, race, gender, and incomes. With both the demographics and the party accounted for, any other differences in voting could be attributed to the race of the representative.

Then he looked at voting records, paying particular attention to bills designated important by the Leadership Conference for Civil Rights (LCCR), the Americans for Democratic Action (ADA) and Congressional Quarterly. The LCCR follows issues pertaining to civil rights like free speech and voting access. The ADA marks votes they think are important to what they define as a liberal agenda, like funding education or decreasing military spending, and Congressional Quarterly highlights the big issues affecting all Americans, such as health care or tax bills.

“I thought that was significant. You actually see the largest difference on bills pertaining to the most important issues that are facing the country,” Kopkin said. “You would think that the Democrats would be more in agreement on these things, but they’re not.”

For instance, “There was one bill that provided for unlimited punitive damages for discrimination based on sex, religion, or disability. In that case, blacks voted unanimously to push this bill and actually, the majority of white Democrats opposed it,” he added.

Based on his results, Kopkin thinks that the House of Representatives could have a substantial impact on the lives of black Americans if there were more black representatives in Congress. The problem, he says, is getting them there. He sees several ways forward.

“One way would be to increase the interest among African Americans in running for office. If you get a lot more black political candidates, some of them will win,” Kopkin said. “Another way is through electoral reform. If we were to implement automatic or universal voter registration – where citizens are automatically registered to vote without having to fill out paperwork, especially in minority communities – that might help.”

Another method is to redraw congressional districts to eliminate racial gerrymandering. The United States Supreme Court recently struck down North Carolina’s congressional map, saying that the state had unconstitutionally packed black voters into two districts to reduce their voting power. The Court is set to hear a case on racial gerrymandering in Texas later this year.

“White voters shouldn’t be afraid that a black representative would neglect their interests in favor of African American constituents,” Kopkin said. Just because a bill would benefit black people does not mean that it would negatively impact whites.

And, of course, he said, we all need to vote.

“Almost half of the voting-age population didn’t vote in the last election, and only about a third voted in the last midterms,” he added. “In order for our democracy to run properly, you can’t have a minority of citizens voting. That means you’re doing it wrong.”