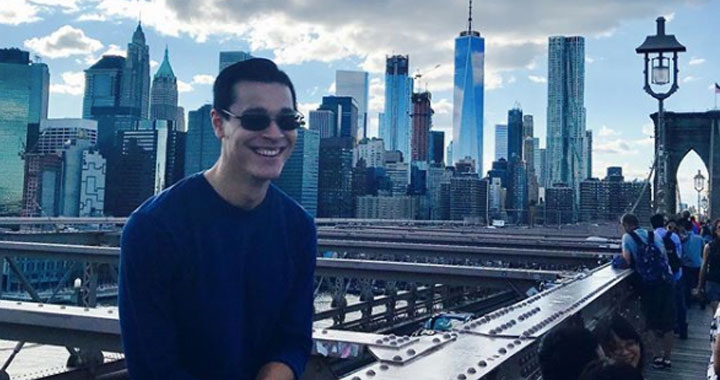 When he arrived in New York City for his internship, Luis de Leon had to list his preferences – he could choose to work in CBS’ evening news division, on the “60 Minutes” or “48 Hours” teams, or any of the other myriad departments.

He chose the Medical Unit, despite having no medical background or training.

“I was a little nervous – I hope I didn’t just throw myself into something weird in an internship I really want to take advantage of,” de Leon said. “It turned out being the best thing I ever did.”

De Leon spent the past summer in the headquarters of CBS News interning under the network’s chief medical correspondent, Dr. Jon LaPook. Every day, he, LaPook, and the unit’s two producers would scour medical journals and studies for new health discoveries and trends. They would arrange and conduct interviews that would later be shown on air and wrote scripts for the broadcasts. On occasion, de Leon would venture out with a photographer to tape interviews to be used during the news segment.

In essence, de Leon said, “I literally got to be the third producer. … It was shocking to me that they trusted me like that right away. That was pretty neat.”

Their trust was well-placed; as a Journalism, Advertising, and Media Studies major, de Leon has worked hard to develop his technical skills. He’s interned at local stations, including Fox 11 in Green Bay and at Milwaukee PBS. Even in high school, where he had aspirations to be an on-air meteorologist, de Leon would call news stations and ask to shadow someone in the studio for a day.

He chose UWM for its Atmospheric Science program and because he wanted to join Panthervision, the university’s award-winning, student-run news broadcast at the time de Leon matriculated. After a few science courses, de Leon realized meteorology wasn’t in the cards, but journalism was.

“The JAMS program really pushes you to do a good story,” de Leon said. “People around the country will notice that you’re using everything you possibly can to your advantage. … They don’t care if you’re pretty and look great on camera or if you’re at a well-funded, good-looking student-run studio. They see that you’re trying to make as much as you can out of what you have, and they’ll appreciate that. I think that’s why I got the internship with CBS.”

In addition to working with Dr. LaPook, de Leon’s internship also required him to attend speaker and writing workshops with his fellow interns, as well as collaborate with them to prepare a three-minute feature piece. The group met some of the network’s flagship anchors and correspondents like Anthony Mason, Scott Pelley, and Jim Axelrod.

The best part of the internship was how all of the CBS crew supported the interns, de Leon said.

“Their willingness and openness to helping me, and letting me in on whatever they were doing was the best,” he said. “There would be meetings with one of the more famous correspondents and I’d be like, can I come? Yeah! … The fact that I was even in New York and had the opportunity to be around this talent [was amazing].”

The experience built his talents as a scriptwriter, researcher, and interviewer, he added. One of the most interesting pieces he worked on had de Leon traveling to Connecticut to talk with a widow whose husband was killed in a train accident. The story covered the Federal Railway Administration’s decision to discontinue sleep apnea screenings for conductors.

De Leon also helped LaPook and his team produce stories ranging from the introduction of a new vaccine delivery method to the shooting of Congressman Steve Scalise, who was wounded during a shooting at a baseball team practice in June.

These days, de Leon is putting his skills to use as an intern in UWM’s University Relations department. He’s applying for jobs for after graduation in May, and hopes  he can work at the same Fox affiliate he interned for previously in Green Bay.

And after that? He might just return to CBS someday – this time as an anchor.