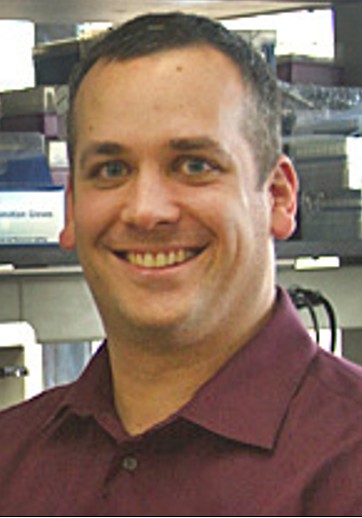 Professor of Chemistry and Biochemistry

I am interested in studying the relationship of structure and function as it pertains to enzymatic catalysis. Specifically, I study the structures and mechanisms of enzymes involved in the biosynthesis of the vast array of nonribosomal peptides produced by microorganisms. This diverse class of bioactive peptides includes compounds with antibiotic, antiviral, cytostatic, cytotoxic, and imunosuppressant properties. Despite the wide variety of chemical and structural characteristics displayed by these peptides, they are produced by remarkably similar enzymatic assembly lines. These so-called nonribosomal peptide synthetases (NRPSs) are modular mega-enzyme complexes. Each module consists of domains with the catalytic activities necessary to select, activate, and incorporate one residue into the nascent peptide. The modular nature of NRPS assembly lines, and the range of catalytic activities represented, lends these systems to investigations of the biochemistry of multi-enzyme complexes and protein-protein interactions. Furthermore, the modular architecture of NRPS complexes offers the possibility of "mixing and matching" modules to produce engineered peptides with enhanced activities or altered specificities. My work currently focuses on the enzymes responsible for the biosynthesis of the antibiotic enduracidin, however the lessons learned from this system should be applicable to many other NRP biosynthetic pathways.

Neutron Diffraction in the Study of Enzyme Mechanism

X-Ray crystallography is a powerful tool for the study of enzyme mechanisms, but the inability, even at the highest X-ray resolutions achievable, to routinely locate hydrogen atoms in active site functional groups, substrates, or intermediates places limitations on the information available from these experiments. Neutron diffraction experiments are conceptually similar but are distinguished by the fact that neutrons are scattered by the nuclei of the atoms in the crystal. Thus, in neutron diffraction experiments deuterium atoms have approximately the same scattering power as carbon. When crystals of perdeuterated protein are used, the positions of the deuterium atoms are easily determined, permitting, in most cases, unequivocal assignment of the protonation states of ionizable groups. The major limitation of neutron diffraction has been the rather low intensity of available neutron sources, which necessitates extremely large protein crystals (< 1mm3). However, the advent of spallation neutron sources coupled with improved optics and neutron detector technology has reduced the minimum crystal size approximately 10-fold (0.1mm3), making neutron diffraction accessible to a larger number of proteins. It is my intention to aid efforts to bring neutron crystallography into the mainstream of structural biology. By uniting neutron and X-ray crystallography, structural biologists will be able to solve problems that neither technique could address alone.