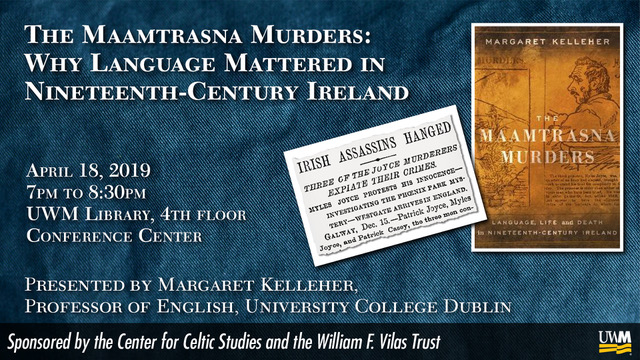 Professor Margaret Kelleher (English, UCD) will present a lecture about the topic of her new book, entitled “The Maamtrasna Murders: Why Language Mattered in Nineteenth-Century Ireland”. She considers the crucial role played by language and translation in the trial and conviction of the men charged with the brutal murder of a family in the townland of Maamtrasna, on the Galway-Mayo border. Myles Joyce (Maolra Seoighe), a native speaker of Irish, was sentenced to death by an English-speaking court. In 2018, more than a century after his execution, he was granted a presidential pardon on the grounds that he had been wrongly convicted and hanged for a crime he did not commit.

Refreshments will be served.

Sponsored by the William F. Vilas Trust and the UWM Center for Celtic Studies