John Gleeson was the founding father of the Center for Celtic Studies and our presiding spirit. 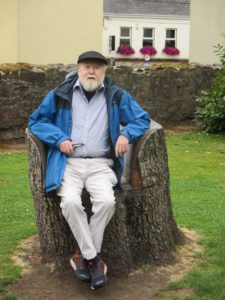 John moved from Dublin to Milwaukee in 1980 and went on to earn a M.A. degree in Applied History and a M.F.A. in Film from UWM. At UWM, he subsequently taught courses in Irish language, film, folklore, and Celtic religion. He was the driving force behind the creation of the Center for Celtic Studies in 2001, and became the Center’s co-director with professor Bettina Arnold. Propelled by his boundless energy and enthusiasm, Celtic Studies expanded its activities and outreach, connecting UWM and Milwaukee to the wider Celtic world. John led and coordinated the Colmcille Semester Program Abroad, the Oideas Gael Summer Program in Donegal, and study tours to Ireland for the general public. He touched the hearts of all his students. John was also a pillar of the Irish American community in Milwaukee: he was a founding member of the Irish Cultural Heritage Center, Milwaukee Irish Arts, the Craobh Curtin Branch of Conradh na Gaeilge, and a cultural advisor to Milwaukee Irish Fest.

John Gleeson’s stories about history and folklore never failed to inspire, delight, and instruct his audience. His wit and mischief were one of a kind. Ní bheidh a léithéidí arís ann: the like of him will never be again.

Frederick Douglass and His Songs of Resistance Lecture